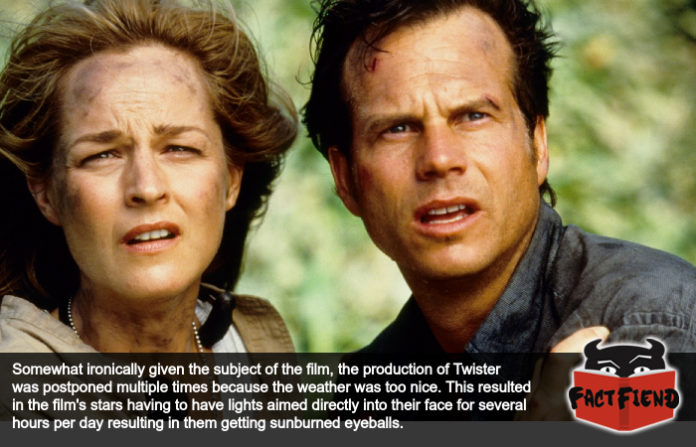 Twister is a film about Bill Paxton and Helen Hunt hunting tornadoes at the most fuckable point in their respective careers. While not exactly a critical darling, the film was widely praised for the quality of its special effects, some of which were achieved by partially blinding the film’s leads. At least temporarily.

First though, for anyone unfamiliar with Twister, it’s important to clarify just how few fucks anyone involved with the production of the film gave about the story. For example, the film was greenlit before a script had even been written, with Warner Bros. signing off on funding the whole thing after seeing a single minute of test footage of a tornado fucking up a barn from ILM. Which to be fair, was awesome in the film. 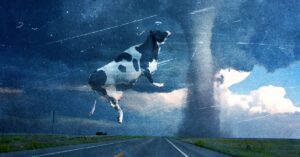 Speaking of the script, it was largely slapped together in a few weeks by Joss Whedon who farted it out mere hours before he got married and did such a shitty job the studio brought in another writer who worked on in right up until they finished filming.

Not that any of this mattered because the selling point of the film was the titular twister, the effects for which were handled by the aforementioned ILM who ended up doing a lot more work than anticipated because, somewhat ironically, the weather during production was too nice.

Specifically, it’s noted that the sun was blazing the entire time they were filming, which was awkward because almost every scene in the movie called for overcast skies you know, because tornadoes. Now while ILM were able to digitally replace the skies, the lighting for the scenes was still, off. Something they remedied by pointing giant fuck off lights into Bill Paxton and Helen Hunt’s eyes for a bunch of scenes to artificially darken the background of certain shots.

As you might imagine though having retina obliterating lights shone directly into their eyes for several hours ended up causing Hunt and Paxton eyeball-related distress. So much so that both of them ended up temporarily blind because the lights sunburned their eyes! A setback both took in their stride, wearing cool-ass sunglasses for a few days while the production figured out a way to maybe, not annihilate their star’s eyeballs.