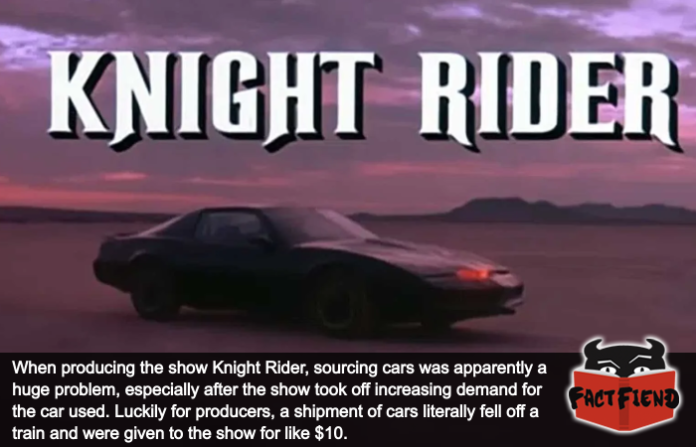 Knight Rider is a TV show about a hyper-advanced supercar inhibited by a priggish AI that solves crimes by having David Hasselhoff run people over. A ratings smash which saw the car become a star in its own right and audiences clambering for ever more elaborate stunts and set pieces, the show initially had trouble sourcing cars to run people over with until about 10 literally fell off a train and onto producer’s laps.

For anyone unfamiliar with the show it centres around the misadventures of Michael Knight, a man with a chest wider than a car door who roams the country in his indestructible robo-car bristling with state-of-the-art weaponry in search of even tighter leather jacket.

Said robo-car, called KITT in the show, is described in-universe as being the pinnacle of mechanical engineering and was designed by an eccentric billionaire for the express purpose of fighting crime, by running people over. 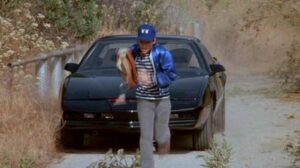 Ostensibly a heavily modified Pontiac Firebird Trans Am worth tens of millions of dollars, the actual car used in early seasons was a stock model of the same car with only a handful of actual modifications made, mostly for aesthetic reasons. According to the guy behind said modifications, Michael Scheffe, the most obvious thing he did was taper the cars nose, later noting that he was surprised that Pontiac themselves never did this as the lines of the car (at least to him) seemed to naturally flow to this point. It also helped that doing this made the car look like, in his words, the lower part of a fibreglass knight’s helmet. 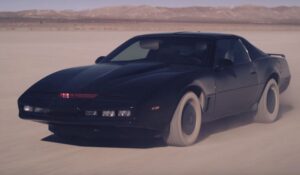 Now for the show’s first season producers only had access to 4 cars, which isn’t really accurate because they needed the best looking or Hero car for promo shots and the like, meaning they realistically only had 3 cars that they could use for stunts and even then, each car was built specifically for certain kinds of stunts. For example there was a lighter one used for jumps and another with a high-performance engine and tires for doing doughnuts and shit.

The problem was that these stunts invariably ended up damaging the cars which risked causing continuity issues due to the fact that, in-universe, KITT was supposed to be virtually indestructible. 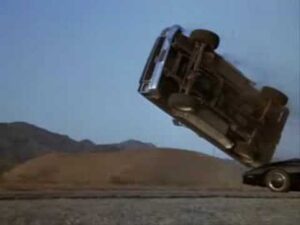 For anyone curious why the show couldn’t just buy more, they were initially hindered by budgetary constraints and later, by the runaway success of the show itself which saw the few Firebirds for sale on the open market being quickly snapped up by fans. Fortunately for producers an opportunity arose in the form of a derailed train that just so happened to be carrying a fresh batch of Firebirds, which as a result of the crash, couldn’t legally be sold or driven on public roads.

A turn of events the producers of Knight Rider decided to capitalise on by offering to “dispose” of the cars on GM’s behalf, explaining that since the show did all of its stunts on closed or private roads, no laws would be broken. A deal GM were receptive to, giving producers either 10 or 12 cars depending on which source you consult, and charging them just a single dollar per vehicle. Which, admittedly, was a pretty good offer, albeit one that came with a truly heart-breaking caveat. That every car had to be completely and utterly destroyed after filming concluded.

A request producers honoured, crushing near-enough every KITT with a big-ass wrecking ball at the end of the show’s run. As if that wasn’t bad enough, to avoid a potential lawsuit the guy tasked with crushing the cars, Julius Inglima, was explicitly instructed to leave nothing behind in case it somehow ended on a car belonging to a fan that ended up crashing or something. An instruction Inglima mostly respected, saving a sensor bar from one KITT out of a sense of obligation to fans. Meaning that, in a small way, KITT managed survive.