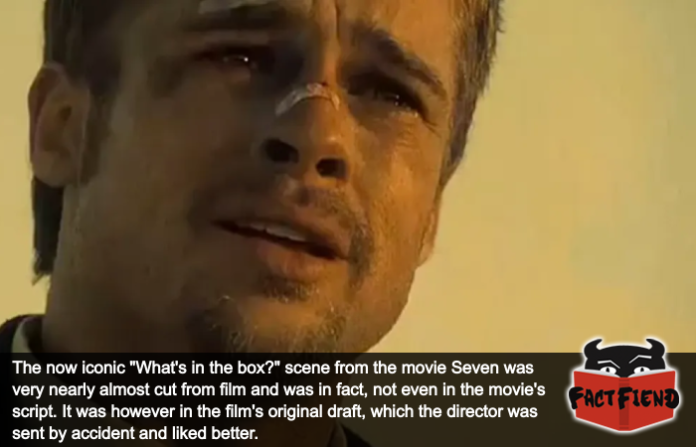 Few movies have an ending as shocking, bleak and well-known as Seven with critics and fans continuing to debate their interpretations of it nearly 3 decades later. Something that makes it kind of hard to believe that the studio not only fought to change the ending, but never even wanted it in the first place.

First things first, for anyone unfamiliar with Seven, it ends with Brad Pitt shooting Kevin Spacey in the face after the former learns that the latter has hacked off the head of his pregnant wife (played by Gwyneth Paltrow) and stuffed it into a box. Now as mentioned in the intro people have debated for literally decades at this point if that’s what actually happens because the movie is deliberately ambiguous as to what exactly is in the box.

This said, the film’s script is pretty clear that the box does indeed contain Pitt’s wife’s severed head, which makes sense because what else could possibly illict this extreme a reaction from a hard-boiled detective type?

Whatever the case, it’s known that the studio fucking hated this ending, so much so that they made the film’s writer, Andy Walker, rewrite it over a dozen times to make it more, audience friendly. Which wasn’t exactly the kind of movie director David Fincher wanted to make, with the director famously quipping that prior to being sent the script to Seven he’d rather have cancer than work on another movie. Which sounds extreme until you realise the movie he’d worked on before Seven was a huge piece of shit called Alien 3. 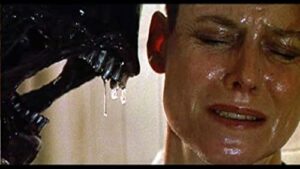 So imagine the director’s elation when he got sent a script where the main character’s pregnant wife gets Predator-ed and then the whole thing smash cuts to the credits. In fact, Fincher was so excited about the prospect of directing the movie he called the studio to compliment them on green-lighting a movie that didn’t have a sappy, generic Hollywood ending and instead functioned as, in his words “a meditation on evil“. Only for the studio rep he called to ask what the fuck he was talking about as the script they had ended with Pitt’s character chasing Kevin Spacey across town to save his wife. The exact kind of ending Fincher reportedly spent 20 minutes shitting on while gushing about the ending in the script he had before this awkward correction was made.

After a brief back and forth it eventually emerged that Fincher had accidentally been sent a copy of the original script which he preferred, telling the studio point blank he wouldn’t direct the movie without the head-in-a-box ending. Not wanting to lose Fincher the studio initially relented on this but got cold feet when test audiences reacted poorly to it. You know, which was kind of the point but whatever.

When they realised they couldn’t convince Fincher, the studio tried instead to convince Brad Pitt that the ending sucked, suggesting among other things that maybe the box should contain his dog’s head instead and asking if he’d consider an ending where he didn’t shoot Kevin Spacey in the face. Both of which Pitt shot down, noting that he felt it was important to his character that his character not necessarily do the right thing, but the thing that felt most natural for his character which just so happened to be shooting Kevin Spacey’s smug, prick face like 40 times. 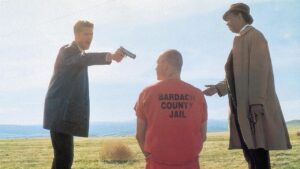 Not that Pitt needed to do this because the actor reportedly had it written into his contract that the ending didn’t change, which didn’t stop the studio trying anyway.

However, Fincher’s stubbornness could only prevent studio interference for so long and he was eventually forced to add a monologue to the end of the film, his original vision was for the film to cut to black the moment Pitt pulled the trigger, an addition Fincher has since described as pointless because the ending is still bleak as fuck but he begrudgingly tolerated because it was the only way to get the studio to shut the fuck up.