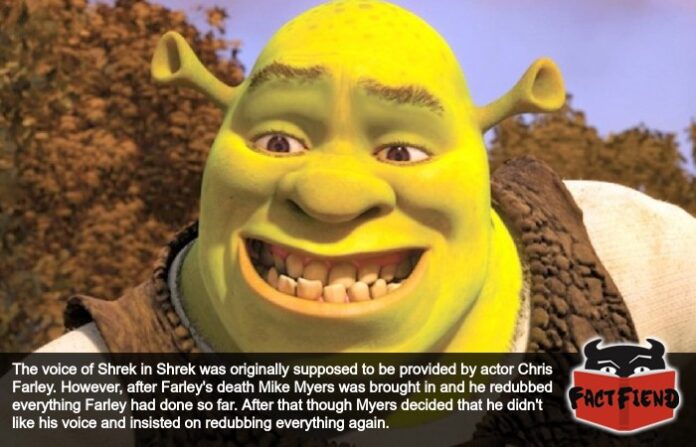 Shrek is a film all about a 9 foot tall green ogre who WWE’s the shit out of an army of knights and rescues a buxom princess from a dragon-guarded castle just to be left alone. Basically he’s a hero. Whilst an iconic character today, Shrek as we know and love him today is the result of a series of design overhauls that included redubbing all of the character’s lines 3 times.

To explain it’s pretty well known amongst fans of the film, or Shrek-Heads as we assume they want to be called, that the voice of Shrek was originally going to be provided by comedian Chris Farley. With it being reported that the actor recorded basically an entire film’s worth of dialogue. Audio Dreamworks scrapped in its entirety after Farley’s passing along with all of the ideas they had for the character who, at the time, looked like this. 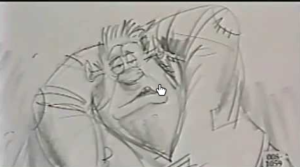 Now while it’s often reported that Farley was the first choice to voice Shrek it has since emerged that Dreamworks originally approached Nic Cage to voice the character, a meeting that reportedly went nowhere because Cage didn’t want to look like an ogre.

Anyway, after Farley was brought on to the project, recorded nearly all of his lines and then died, Dreamworks, in an attempt to salvage something from the project, brought in Farley’s fellow SNL cast-mate Mike Myers to replace him. Something Myer’s was reportedly very excited about, noting later that he was attracted to the project due to its underlying themes of “accepting yourself for who you are“. Something he epitomised by demanding a complete script rewrite to excise all traces of Farley’s characterisation of Shrek thus far. 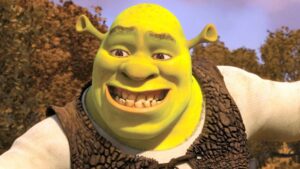 It gets better though because after Myers recorded another movie’s worth of dialgue for the character and was being shown a rough cut of the movie, he decided that he wanted to scrap all of them again to make Shrek Scottish. You see, when Myers first recorded dialogue he did so in basically an exaggerated version of his regular speaking voice, which he was happy with until he saw the character of Lord Farquaad. Or more accurately heard him.

To explain, Myers liked the idea of Farquaad having a stereotypical posh British accent and felt that Shrek, to better contrast with him, should have a typically working class accent. Specifically a Scottish accent because that’s the only accent he can do as evidenced by how long he’s been coasting on it. 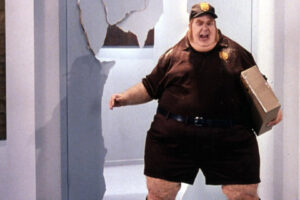 The problem with this was though that animation work on the film had already begun and whilst changing dialogue wasn’t as bad as say, the lead actor dropping dead in the middle of production, it was still going to be a prohibitively expensive ball ache to tweak Shrek’s animations to fit Myers’ new take on the character. Something the actor didn’t care about out, insisting that they scrap all of the audio for the character again so that he could do it all again with a Scottish accent. A decision that ended up costing production about $4 million, or roughly 10% of the film’s total fucking budget, so Myers could be Scottish.