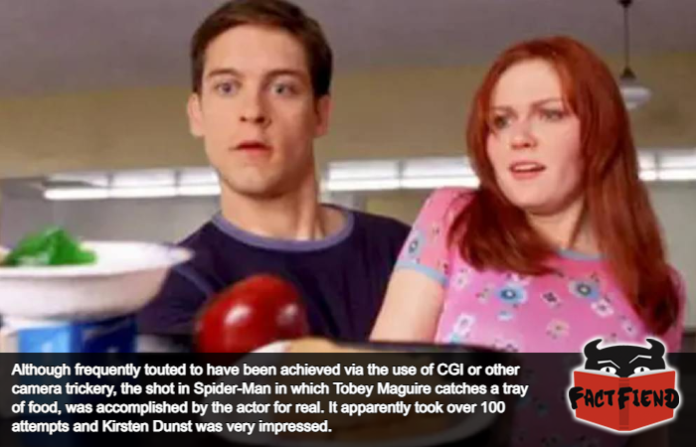 the first Spider-Man movie is fucking rad, which is pretty much the only descriptor you can use for a film in which a man dressed like an armour plated goblin terrorises an entire city with skeleton bombs. Arguably one of the most well-known shots from the movie is one where Tobey Maguire catches an entire tray of food using his recently acquired spider-powers, a shot that the studio inexplicably wanted to cut despite Maguire pulling that shit off for real after an entire day of shooting.

To explain, shortly after Tobey Maguire Spider-Man is bitten by a radioactive arachnid, there’s a scene in which his love interest, Mary Jane (played by Kirsten Dunst) absolutely eats shit whilst walking through the school cafeteria.

Luckily for Mary Jane’s spine, Tobey Maguire Spider-Man is there to save the day and her lunch.

Along with being a memorable, character establishing moment, the scene is also a great introduction to one of Spider-Man’s most iconic and hard to explain powers, spider-sense. Essentially, a built-in “I win” button for the hero that allows him to somehow just know when danger is afoot and react accordingly.

Now it has been known for a long-time online that this particular shot was realised entirely without the use of either CGI or camera trickery. As in, Tobey Maguire really caught all of that food with one hand whilst holding an entire Kirst Dunst in the other. The only help Maguire had was a little glue on his hands so that the tray wouldn’t tip over, which if you think about it, makes the scene more realistic because that’s how Spider-Man would have done it.

Despite the scene being one of the most fondly remembered from the film, Sony didn’t like it and insisted that it be cut for time upon learning it would likely take 2 days to film. The director, knowing the scene would absolutely whip ass if they could nail it, ignored this request and went right ahead and filmed the scene anyway.

Now, if you’re a fan of movie trivia this fact is likely one you’re already familiar with as this particular anecdote about the movie’s production has appeared on several dozen, other, lesser fact websites. However, it’s worth noting that almost none of those sites cite any sources and when they do, they inevitably lead to other, shittier fact websites saying the same thing, again, without a source. So where is the original source for this piece of trivia? Well, as it turns out, the author of this piece mentioned this particular fact like 10 years ago on another site after watching Spider-Man on DVD and learning about it from the DVD commentary.

However, when the author searched for an online version of the source, they couldn’t find one and had to film their TV during the scene in question with a crappy video camera and uploaded it to YouTube. A video that ended up gaining half a million views due to the sheer amount of sites ripping the aforementioned article off and lazily linking to their source. So why are we mentioning this, well that video allowed the author to immediately monetise their YouTube channel and they thought after 10 years of everyone else online milking it for all it’s worth, it was only polite to do it too and mention this story.