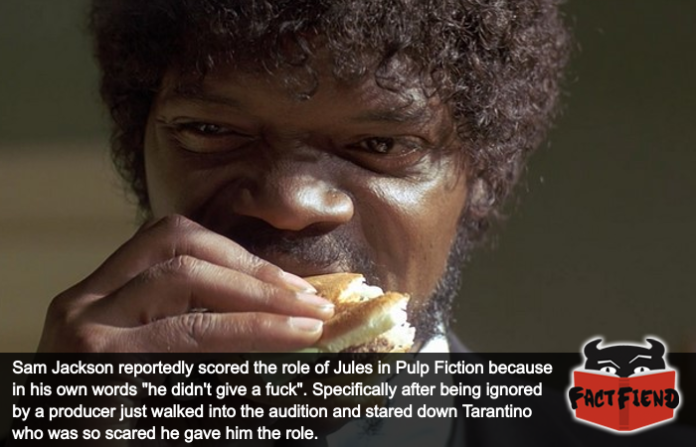 Sam Jackson is an actor known for an eclectic range of ass-whipping roles, with one of the best known being the Jheri curl rocking hardened burger-loving gangster Jules Winnfield in Pulp Fiction. A role Jackson very nearly missed out on and then managed to snatch back thanks, in part, to looking extremely pissed off while eating a big-ass hamburger.

You see while Jackson is synonymous with the role today, it was actually written for an actor Jackson has spent a baffling amount of time being confused for, Laurence Fishburne.

That’s not a joke by the way because despite looking nothing alike Jackson has been repeatedly mistaken for Laurence Fishburne by everyone from fans to fucking news reporters who’s only job is knowing who the fuck he is and asking softball questions about his latest movie.

Anyway, one person who didn’t know that the role was written for Fishburne was Jackson who’d somehow come to the assumption that the role had been written specifically for him. In fact, Jackson was so sure of this that he reportedly bombed his first audition because, well, he didn’t know it was an audition. Something that saw another actor, Paul Calderon, being considered a better fit for the part.

Understandably annoyed, Jackson was hesitant to have anything else to do with the movie until, erm, Harvey Weinstein convinced him to audition again. Before you Google it, yes we do mean that Harvey Weinstein.

Moving swiftly on, Jackson wasn’t at all convinced and walked into the audition eating a burger. Not because his character was set to do that during the film for anyone wondering, but simply because he was hungry and so pissed off he didn’t care. Not that it mattered because according to Jackson nobody was there anyway, except a harried intern who quickly grabbed a producer to greet him. A producer who inadvertently secured Jackson the role by reaching out to shake his hand and saying …

“I love your work Mr. Fishburne.”

At this point Jackson, to paraphrase him, had stopped giving a shit so when he was finally allowed to audition he strolled in eating the burger and stared at Tarantino and his gathered producers like, well, like his character does in the movie.

According to the producers at that moment they knew they’d found Jules because they legitimately thought Jackson was a moment away from shooting them all in the face with a gun while nonchalantly chowing down on a burger. A worry Jackson did nothing to alleviate when he told the producers that if they gave the part to someone else, he’d shoot them in the face. While eating a burger.

Suffice to say, this was enough to convince them to give Jackson the role. Not that this matter because at this point we imagine he’d have just turned up anyway and started burger-slapping fuckers out of the way while quoting impossibly rad made-up bible verses.