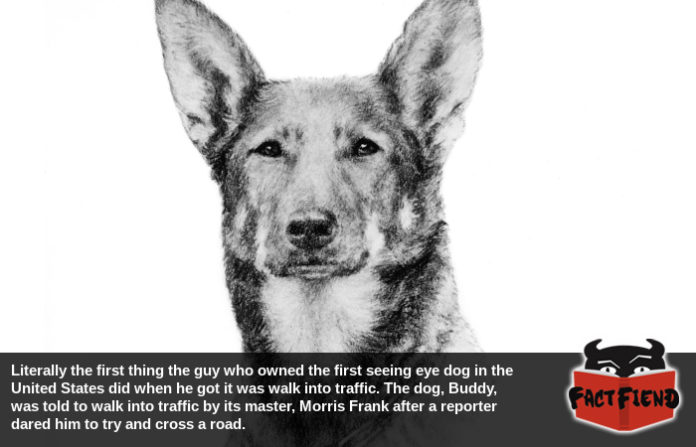 Nowadays seeing eye dogs are largely able to go almost anywhere their human master is without restriction. A fact that is largely credited to the tireless work of a guy called Morris Frank, a man whom reporters dared to walk into traffic on literally the first day he owned a guide dog.

Known today for being the founder of The Seeing Eye, which teaches dogs how to function as a pair of eyeballs for blind or visually impaired people, Frank could actually see for most of his youth and was in fact born with perfect vision. At age six though Frank was blinded in one eye while riding a horse, supposedly after a branch accidentally slapped him right in the head. 10 years later Frank was blinded in his other eye during a boxing match, leaving him permanently unable to see.

Not one to let something like being completely fucking blind stop and being endlessly kicked in the dick by life get him down, Frank shrugged off both accidents and went on to become a moderately successful insurance salesmen. During this time Frank would routinely hire young men to serve as surrogate eyes and guide him around, but became annoyed at how often they’d just walk off when they got bored and leave him standing around looking like a fucking lemon. 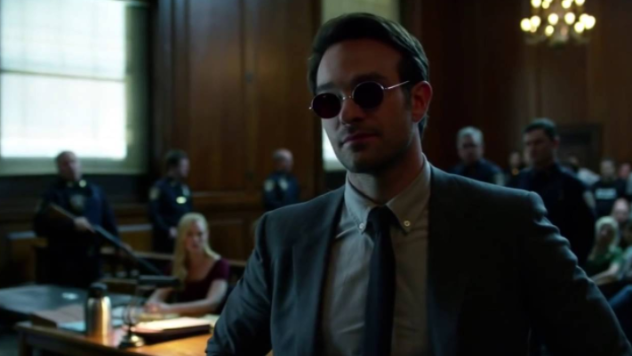 After this happened one too many times Frank began searching for an alternative to this inelegant solution and happened upon an article about a school in Switzerland that trained dogs to guide around WW1 veterans that had been blinded by mustard gas. Getting straight to the point Frank wrote a letter to the author of the article in 1927 simply saying “I want one of those dogs!”

In early 1928 after a brief correspondence with the author Frank made his way to Switzerland and began training with a female German shepherd whom he called Buddy for reasons he never bothered to elaborate on. After a few months of training together the the bonding of man and dog was complete and Frank made the decision to return home with his eyeball-replacing wonder pupper in June of that year.

Keen to sell the public on how good of a girl Buddy was, Frank invited the press to watch him arrive in America on June 11th and loudly bragged to a gathered crowd of reporters that with the help of buddy he was capable of doing anything a man with both eyes could. Wanting to test this one of the reporters half-jokingly dared Frank to walk into traffic if he was so confident in his dog. Without saying a word to the reporter Frank gave the command for Buddy to walk across a nearby road and casually strolled across it without incident as a demonstration of the level of trust he placed in his furry friend.

Following this Frank founded the aforementioned school to train more guide dogs and basically spent the rest of his life campaigning to ensure Buddy could accompany him anywhere she damn well felt like. Because fuck you, she was a good dog who could do what she wanted.