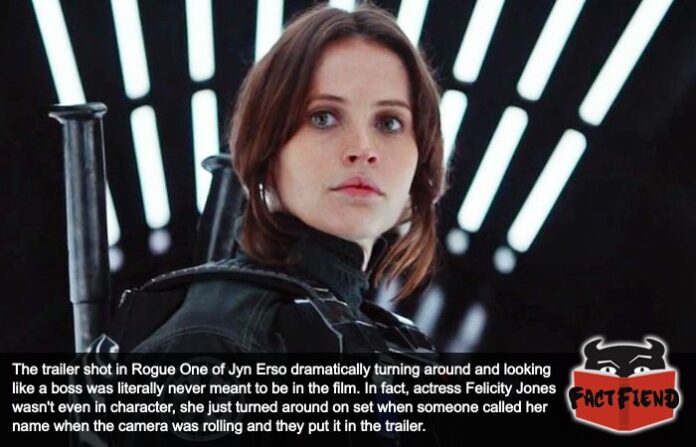 Rogue One is a film set in the Star Wars universe where every main character dies horribly and movies released 40 years ago render the overarching plot pointless. It’s also somewhat infamous for featuring a trailer absolutely rammed full of shots that never appeared in the final film. Something that was the result of the film’s director quite literally filming shots purely for, The Aesthetic.

By far the shot that showcases this the best is arguably one of the most enduring and memorable shots from the trailer, mainly this one of Jyn Erso (a character so forgettable we literally had to Google her name) looking over her should dramatically in a pimpin’ Daft Punk corridor.

A shot that never appears in the movie alongside like half a dozen others including one of the aforementioned Jyn Erso squaring the fuck up to a Tie Fighter.

Something that was initially attributed to the film undergoing extensive and very public reshoots. A theory that was later confirmed by people who worked on the film after it’s less than stellar critical reception.

Anyway, whilst annoying, tweaking, editing and removing scenes from films after the trailer drops isn’t exactly uncommon with modern blockbusters. What is less common though is films straight up fucking lying about what a film contains in the trailer. Even rarer than that though are films where the director just up and admits to doing this.

To explain, shortly after the release of Rogue One director Gareth Edwards was asked point blank why the trailer for the film contained so many shots that just, weren’t in the final film. In response Edwards mentioned that during production he would spend an hour a day after filming wrapped surreptitiously filming the actors dicking around in costume when they didn’t think the cameras were rolling. A daily ritual that ended up catching a candid shot of actress Felicity Jones responding to someone calling her name just as some lights were being turned on. A shot Edwards thought looked so badass he immediately ordered her to do it 17 more times.

To be clear, this shot was never supposed to be in the film and Jones wasn’t in character when it was captured, Edwards just thought it looked cool. A fact the people who cut the trailer weren’t aware of when they decided to make it the literal last shot of the whole thing and Edwards inexplicably never bothered to correct them about. Later saying that he was just glad the shot got used.

The same is true of this shot of Orson Krennic power-stancing and asserting dominance on the rest of the universe which again, wasn’t in the final film and more importantly, was never meant to be. 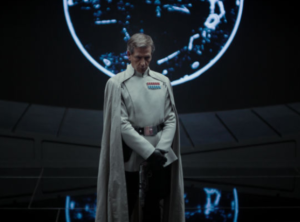 In fact, actor Ben Mendelsohn didn’t even know that the camera was rolling. He’d literally just finished a filming a scene and was stood waiting to be told what to do. Again, the people cutting the trailer didn’t know this and naturally assumed that the power-shot of a guy in a colgate-white space-cape was important when in reality, it was just the actor stood awkwardly waiting to go back to his trailer and take a dump.

A style of shooting we kind of want to take off if only to see trailers for horror movies where the monster is stood checking their phone.