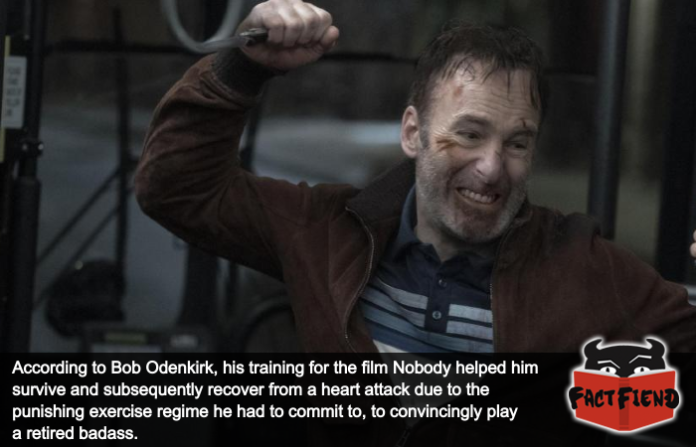 Bob Odenkirk is an actor who proves the old adage that comedy is the hardest thing for an actor to do as he has been able to seamlessly transition into other types of film including, most recently, the ageing actor kicks the living fuck out of the Russian mob genre with the film Nobody. A movie Odenkirk directly credits with saving his life.

To explain and get the sad part out of the way as quickly as possible, in 2021 Odenkirk collapsed on the set of Better Call Saul, prompting his co-starts and later medical professionals to have to rush in and revive him. An understandably traumatising moment for Odenkirk that, according to him, could have gone much worse if not for the fact he’d spent the last 2 years learning to snap limbs with the kind of pinpoint precision normally reserved for a speed-run of Dead Space.

To explain, contrary to his comedic origins, Odenkirk is an incredibly serious and focused individual when it comes to writing and prepping for a role. For example for scenes in both Breaking Bad and Better Call Saul, Odenkirk would frequently run scenes with his co-stars and even extras on his days off to ensure the interactions he had with them felt completely genuine. Hell, he even learned to make cinnamon buns when he learned that his character was going to work in a Cinnabon, going as far as to attend training in-character as “Gene” the hollowed out shell of a man Saul Goodman becomes after the climax of Breaking Bad.

Odenkirk was similarly committed to the role of Hutch Mansell, reportedly training for two straight years before a single second of footage of him whipping the fuck out Russian gangsters was shot. Despite the gruelling nature of the training, Odenkirk threw himself into it and in keeping with his reputation as a perfectionist, would send long rambling emails to director Ilya Naishuller breaking down everything he’d filmed and how it could be improved. Something that so annoyed Naishuller that he eventually sat Odenkirk down and told him point blank to cut that shit out, telling the actor –

Fortunately for Odenkirk the sheer amount of work he put into prepping for the role resulted in him getting in phenomenal shape for a guy nearing 60. So phenomenal that his the arteries leading to his heart enlarged to accommodate the increased blood flow. A change that allowed the CPR that eventually revived him following his heart attack to drive more critically vital oxygenated bloody to his major organs. Or to put it another way, Odenkirk worked out so much that his heart got buff enough to survive a fucking heart attack.

Likewise, being in better shape allowed Odenkirk to recover more effectively and prevented him from suffering any long term damage from what would ordinarily be a debilitating injury. Understandably, following this, news of a Nobody 2 being made started to circulate, which makes sense given it made the star immune to heart attacks!