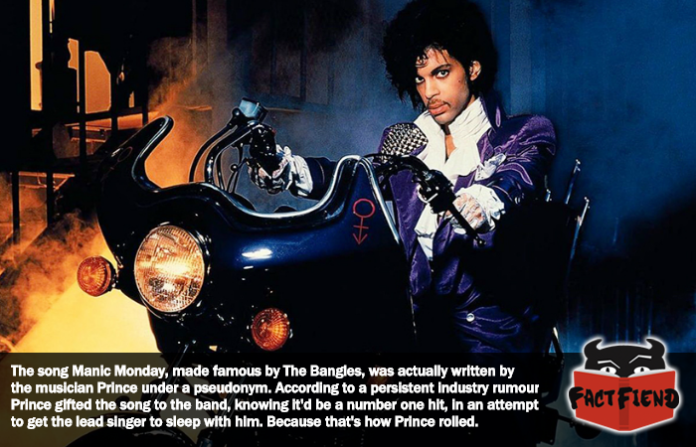 Prince was a musician best known for his virtuoustic skill with a number of instruments, his absurdly prolific creative output and the the number of women he slept with as a result of the other two things we just mentioned. In regards to the latter, it has long been rumoured that the musician went as far to write number one hits just to get laid.

That hit was Manic Monday, which according to those who’d know such things, Prince wrote in 1984 for another band before deciding it didn’t fit with their style. Supposedly the song sat in Prince’s musical vault (something that actually exists and isn’t a thing we’re making up) though the artists is known to have recorded a demo version which he never did anything with.

Prince sat on the song for a further two years before approaching the band The Bangles, specifically guitarist Susanna Hoffs, to ask if they wanted it. Keep in mind that this song almost immediately entered the charts and is now the most famous song the band ever recorded, so Prince was basically offering to gift the band sales royalties for the rest of their lives. Hell, Prince even offered to be credited under a pseudonym so that his attachment to it wouldn’t overshadow the band. Which begs the question, what the hell?

Well the story goes that Prince offered the song to the band because he had a thing for Hoff and wanted to have sleep with her. A rumor supported by Prince’s legendary penile resume and every picture of Hoff ever taken. 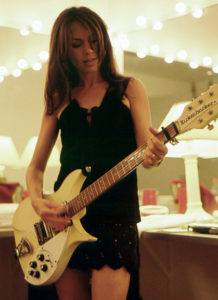 While Hoff has long denied the rumor (stating that Prince gave the band the song because he was a fan), the idea of Prince writing a massive hit just to get laid isn’t without precedent. To explain, the pub quiz aficionados reading may recall that Manic Monday, while popular, was never a number one hit (except in South Africa). Which is true, however, the song Nothing Compares To U absolutely was.

Like with Manic Monday, Nothing Compares to U was a song Prince wrote and then simply gave to another artist, in this case, Sinead O’Connor, seemingly just to get his dick wet. Now while there have been many rumours that Prince similarly gave the song to O’Connor in an attempt to get her into bed, the artist himself claims that he wrote it for his girlfriend at the time. Just let that sink in, Prince wrote a worldwide smash hit and then just, gave it away purely to convince a woman he was already dating to sleep with him, which anyway you look at it is a hugely baller move.