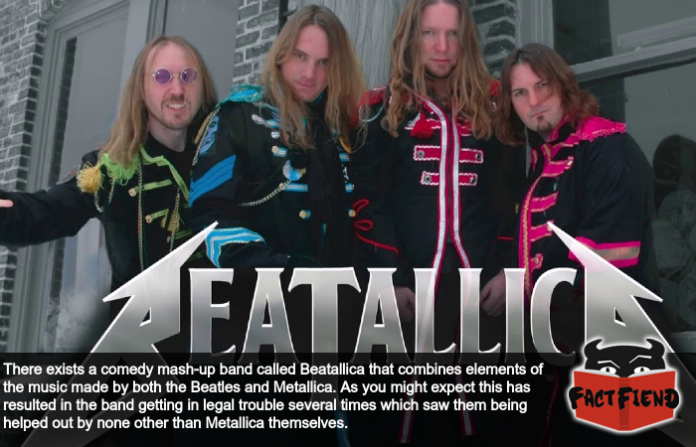 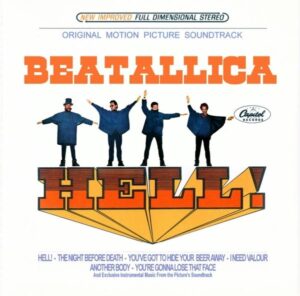 As an aside, it’s noted that the band got popular almost by accident after an EP they made as a souvenir of their first (planned to be one-off) performance leaked onto the internet. Somewhat ironically given how one half of their musical influence reacted when that happened to them, the band were super stoked to learn people were enjoying their sound and released a bunch of music onto the internet for free. Almost like that’s a much better response to people sharing and enjoying your art than suing the living fuck out of them.

Anyway, the band were also pleasantly surprised to learn that members of Metallica were fans of their music, noting that they find it “cool”. Sadly, according to the band, the same can’t be said of the Beatles, though they were understanding of why this wasn’t the case because, to quote Beatallica’s front-man …

“If any of us were marrying models half our age and still out rocking the world, we’d have other things to attend to.”

Which, yeah, is totally understandable.

However, while the band haven’t heard from the Beatles, they have heard from their lawyers, like a lot. For example, in 2005 the band started receiving vaguely threatening letters from Sony (The then owners of the Beatles back-catalogue) demanding that they take their website down. A demand the band were baffled by given that their entire back-catalogue was freely available to download so it’s not like they were making money from it and also, they’re a fucking parody band.

Here’s the thing though, when it comes to copyright law it doesn’t matter how legally in the right you are if the other guy has like $40 billion in resources to put behind a legal shotgun aimed squarely at your balls. As such, the band were unsure whether or not they’d even be able to fight the decision. Or at least they were until a saviour emerged in the form of known asshole Lars Ulrich.

Specifically it’s noted that upon hearing about Beatallica’s legal troubles, Ulrich went out of his way to help them out. Telling Metallica’s lawyer, who as you might imagine is very well versed in copyright law, to draft a letter on their behalf to Sony telling them to cut that shit out.

What makes this more surprising though is that Ulrich was on vacation when this all happened, meaning he took time out of his own vacation to help out a band being sued for copyright infringement. Which is like, so unlike the way Metallica usually acts we’re honestly surprised the letter the band’s lawyers drafted didn’t include the drum notation for St. Anger.