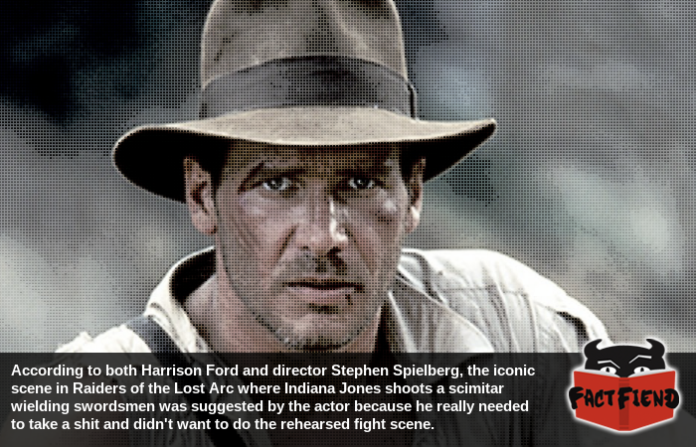 It’s kind of amazing to think that within the space of like 5 years Harrison Ford played two different characters whose most memorable moments are unexpectedly shooting someone to death. As it turns out, while one of these scenes was scripted, one was improvised on the day of shooting because Ford really needed to take a dump.

To explain, during the film Indiana Jones and the Raiders of the Lost Arc there’s a scene in which the titular Jones is confronted by a large sword-wielding Arab man in flowing black robes who taunts the famed archaeologists by performing a 10 hit combo with a sword on the air in front of him. As an aside, it is revealed in supplementary material for the film that this swordsman is an infamous bandit and Nazi assassin feared throughout the Egyptian underworld.

Jones, not wanting to deal with any of that responds to this display by casually drawing his gun and shooting the assassin dead. A scene that has gone on to become one of the most iconic moments in all of film history, which is impressive when you consider it was literally improvised on the day due to a poop emergency.

You see, the script for the film called for a massive fight scene between Indy and the assassin that was supposed to showcase Jones’ proficiency with a whip. Hell, there was even going to be a gag where the swordsman accidentally cuts through a piece of meat a nearby butcher was struggling to carve, prompting the butcher to thank the irate assassin.

However, on the day of filming Harrison Ford really didn’t feel like shooting a several page fight scene, largely because he was suffering from a terrible bout of dysentery. Something that had apparently impacted almost the entire production crew due to the lack of clean water on set. 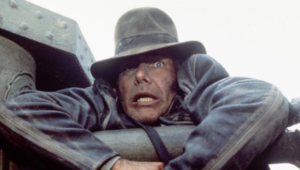 In fact, Ford was so dreading the thought of swinging around a whip in the blazing hot sun for several hours that he suggested that instead of doing any of that, he just shoot the assassin dead. An idea Spielberg found so hilarious he immediately wrote it into the movie, much to the annoyance of the actor playing the swordsman who’d apparently spent weeks rehearsing the scripted fight scene. Then again, we can’t imagine he would have been all that enthused to roughly grapple with a man with crippling diarrhoea so it was probably the best call for everyone that Indy shot first.