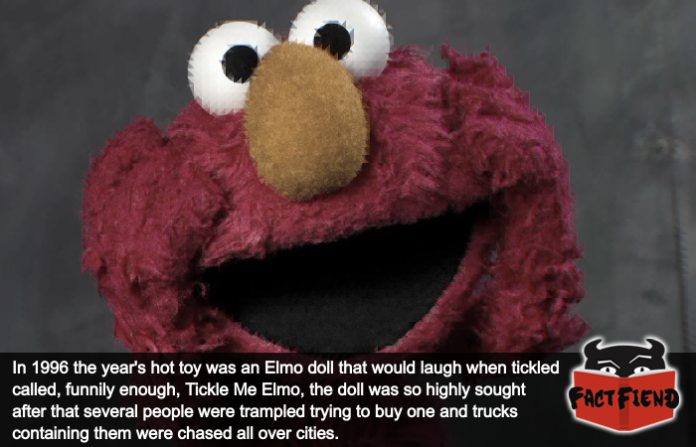 As we’ve discussed on this site before there was a time in the mid-90’s when members of the public were willing to throw hands over small sacks of beans shaped like random animals. A bizarre story made all the more unusual by the fact that this actually kind of happened twice, with the finger of blame being pointed squarely into the cold, unfeeling eyes Sesame Street‘s Elmo.

Known as Tickle Me Elmo, the actually began life as a similar but altogether more, generic-looking toy known as Tickles the Chimp. A lovable, huggable and captivatingly pettable primate whose only purpose was to be tickled to within an inch of his robotic chimp life. 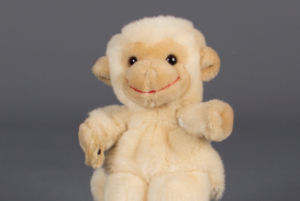 Invented by toy-making legends, Greg Hyman and Ron Dubren Tickle Me Chimp was pitched to Tyco Preschool who immediately saw its viability as a toy if they could find something other than a screaming monkey to wrap around the writhing robotic insides that constituted the basis of it. The problem was, they didn’t exactly have the rights to anything, shall we say, cuddly they could use at the time.

In fact, Tyco were seriously considering creating a Tickle Me Tasmanian Devil for a while since they had the rights to make Looney Tunes toys at the time and figured they may as well do something with them. Now while Tyco did make a few Tickle Me Taz dolls that apparently sold somewhat well at select WB stores in California, the toy was, internally, something executives openly shat on and tried to bury.

Fortunately for Tyco, after losing the rights to make Looney Tunes toys they managed to secure the far more child-friendly Sesame Street license and thus, Tickle Me Elmo was born.

Immediately popular but not exceptionally so, sales of the doll were strong but not ridiculous. Something that all changed when Tyco sent Rosie O’Donnell about 200 of them to give away on her, at the time, quite popular show about a month before Christmas.

Now while Tyco expected O’Donnell to plug the doll, her response was a little more, enthusiastic than they expected and as a result, the 400,000 Tickly Elmos they ordered sold out almost instantly. In anticipation Tyco quickly ordered another 600,000, all of which also sold out.

This left customers who wanted a Tickle Me Elmo quite literally, fighting for the handful that weren’t immediately snatched off of store shelves. For example, a clerk working in a Wal-Mart store was tackled to the ground and kicked unconscious simply because he happened to be holding one of the toys when the store opened. 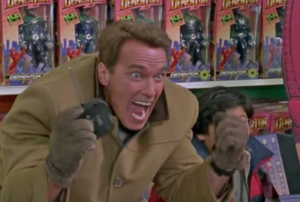 As you might expect, people very quickly took advantage of the wild imbalance between supply and demand, selling Elmos for, in some rare cases, thousands of dollars a piece. Hell, one guy was almost tackled out of mid-air when a radio station strapped one to his chest, made him jump out of a plane and then told people gathered on the ground that the first person to grab it could keep it. 6 days before Christmas.

Something we can’t help but feel goes against pretty much everything Sesame Street has ever tried to teach people but we think the moment people started throwing hands trying to get one of these things, irony died as hard as the Tickle Me Elmo fad did the day after Christmas.