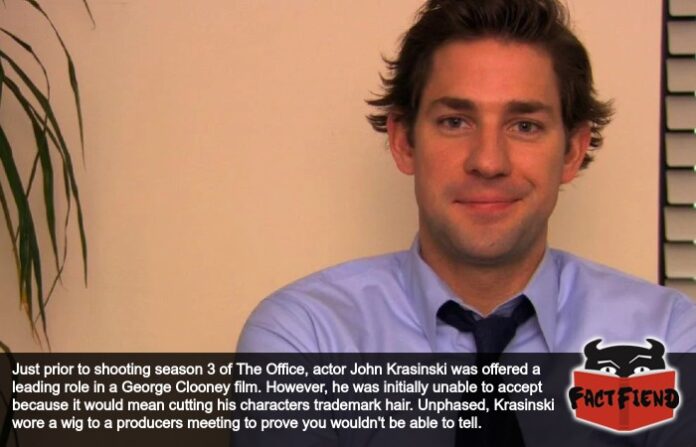 To explain, when actors sign on to do TV shows and movies where they play a character with a distinctive look, they’re very often required to maintain that for the entirety of production and in some cases, beyond. Hell, we’ve discussed on this very site how Brandon Routh had to eat a chicken a day to maintain his Superman physique during the production of Scott Pilgrim Vs. The World due to a contractual obligation to play the Man of Steel in a potential sequel. More aptly we’ve also talked about how Rainn Wilson ended up regretting giving Dwight Schrute the shittiest haircut imaginable because he had to walk around looking like this for about 10 years straight. 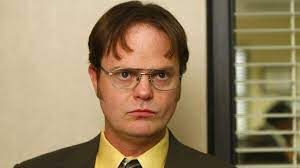 In regards to John Krasinski, he was similarly required to maintain his character’s trademark floppy hair whenever production on a new season of The Office began. Something he didn’t initially mind until he was offered a starring role in the film Leatherheads, an opportunity Krasinski didn’t want to pass up because it involved working closely with the second worst Batman.

The problem was, since the film was set in the 1920’s it would require Krasinski to adopt a closely cropped, period-accurate lid. Something he was literally not allowed to do unless he wanted to have the shit sued out of him by NBC. In fact, the only way Krasinski could legally cut his hair was to have a producer sign off on him getting a trim. Which Krasinski figured would be easy until he tried to do exactly that, suggesting he wear a wig during filming instead, and got shot down. With the showrunner for The Office, Greg Daniels telling Krasinski point blank, people will be able to tell if you’re wearing a wig.

Krasinski, perhaps taking a cue from his character, decided to prove Daniels wrong by just wearing a wig anyway and not telling him. Specifically, Krasinski got a wig made in secret by the show’s hairstylist and then wore it for filming an episode which required him to play basketball. Proving that the wig could not only fool everyone, but stay on even during strenuous physical activity.

But here’s the best part, after filming that scene Krasinski strolled right into Daniels’ office to once again press him about the whole wig affair and was once again that it was absolutely not an option. With Daniels looking the actor dead in the eye and telling him – 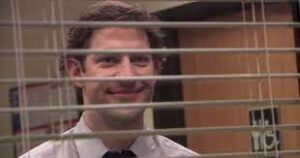 After asking Daniels if he was sure that he’d absolutely be able to spot a wig and being reassured that, yes, he would, John whipped off the wig and placed it on the table like a royal flush made of middle fingers. A move Daniels was so stunned by he immediately gave Krasinski permission to cut his hair and wear the wig if he wanted to because he respected both the gall and testicular fortitude required to pull off that move.