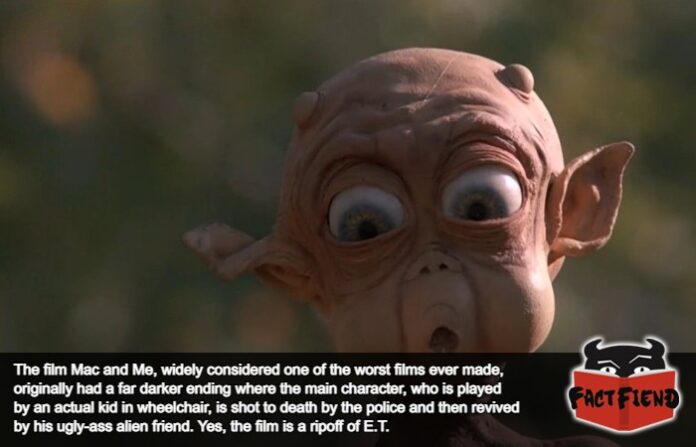 Mac and Me is a critically maligned cinematic turd widely considered one of the worst films ever curled out by a major studio. A rip off of E.T. so blatant calling it original can be written off on your tax return as a charitable donation and filled to the brim with more product placement than some ads, the film is a shameless cashgrab that seemingly bends over backwards to lick the shit covered bootheel of its corporate sponsors. Not that, that mattered to the film’s wheelchair bound star who was mostly just happy for the opportunity to roll his ass down a big hill.

You see for anyone who hasn’t seen Mac and Me or is only aware of it by reputation, the film is literally a 90 minute ad for McDonald’s and Coke so outrageous people in the 1980’s thought it was too much. As an idea of how blatant the film is about this, the film features, among other things, a completely pointless dance number set inside a McDonald’s that has no bearing on the plot, a moment in the film where a dying alien is revived by having Coca Cola poured directly into his mouth and a character who literally spends the entire film in a McDonald’s uniform. Which whilst not exactly the most egregious example of product placement, highlights how few fucks they gave about hiding their intentions. 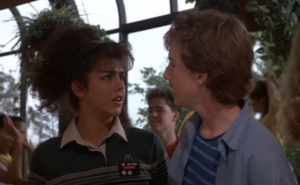 Amazingly, in the years since, the filmmakers have heroically tried to claim that McDonald’s had no input on the film’s direction or were responsible for any of the comically brazen product placement for their brand. A claim we’d like to counter by informing you, our large-penised audience, that the film had a profit sharing scheme with McDonald’s and this image of Ronald McDonald literally holding the film’s script in a trailer to promote the film. 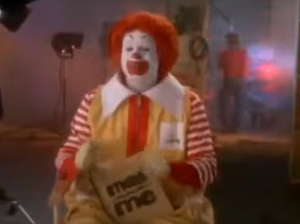 Anyway, the film is a piece of shit, nobody can deny that, however there is one thing the film has been lauded for. The casting of Jade Calegory as the main character, you know, the kid in the wheelchair who flies off a cliff in that one scene.

You see, Calegory is in a wheelchair in real life and his casting has since been praised as the one, single saving grace of the entire film as it’s one of only a handful of times, ever in the history of film that a disabled actor has been cast in a role where their disability isn’t part of their character. Seriously, if you watch the film there’s not a single moment where anybody comments on it, Calegory is just playing a kid who incidentally is also in a wheelchair. If you’re currently wondering why that’s a big deal, congratulations on being an asshole with no ability to empathise with others.

Moving on, this fact actually makes some aspects of the film oddly wholesome as, according to Calegory himself, nobody on set treated him any differently which resulted in him being able to repeatedly throw himself down a massive hill during filming. To explain, Calegory reportedly did many of the stunts seen in the film himself and understandably had enormous fun doing so. Which makes sense because this looks fun as fuck. 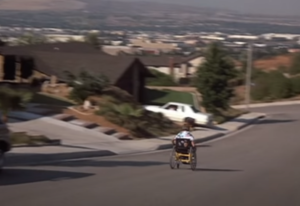 What makes this better though is that Calegory was a chronic smartass which resulted in the few scant interviews he gave about the film being fucking hilarious. For example, when asked if he was worried about injuring himself doing stunts Calegory would reportedly just motion down to his non-functional legs and shrug. Speaking of which, if you’re wondering why Calegory is in a wheelchair, whenever anybody asked him that question his usual response was to look them dead in the eye and say “Vietnam” before rolling away like a badass.