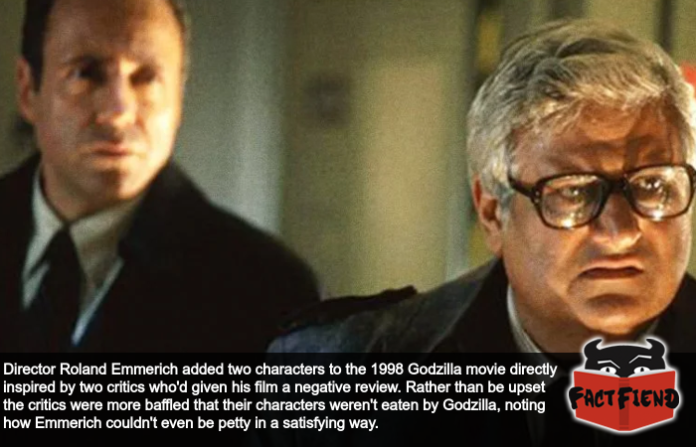 Roland Emmerich’s creative output is the cinematic equivalent of diarrhoea in that it has largely been an unending, sputtering stream of shit occasionally interrupted by the smell of your own farts. A description Emmerich likely wouldn’t appreciate given that he once made two of his harshest critics fight Godzilla in one of his movies.

Those critics were Gene Siskel and Roger Ebert, two of the most prominent and influential critical voices in the film industry for much of their career and men who, as far as we can tell, had mostly functional eyes which understandably led to them panning the film Independence Day. A film which we personally adore because Will Smith tears open a UFO to punch a telepathic alien right in the fucking face but understand that, that might not be considered high art to everyone.

Apparently this review, along with a review the pair did of Stargate really irked Emmerich, like a lot. Like so much that he would complain about it privately and sought to get revenge against the pair for daring to suggest that a movie where Jeff Goldblum saves the day by giving a continent-sized UFO a digital STD was anything less then a cinematic masterpiece.

This ultimately led to Emmerich adding two characters to the 1998 Godzilla movie so obviously inspired by the pair Ebert would likely have been able to tell without his trademark, jam jar thick welding goggles. 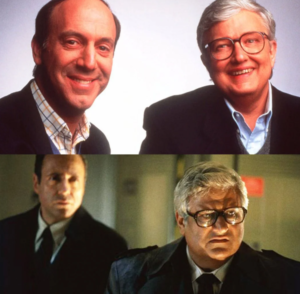 As if that wasn’t on the nose enough, Emmerich named the characters Gene and Ebert and then made sure that Ebert’s character especially was portrayed as a woefully incompetent piss-baby. A swipe so obvious and poorly aimed it might very well have come from one of the soldiers in his movie.

What made this petty jab at Siskel and Ebert so weird though is that it ultimately ended up being completely toothless and falling flatter a Smartprice cheese slice. A sentiment echoed separately by both Siskel and Ebert with both men expressing genuine disappointment that their characters didn’t get made fun of more.

For example, Ebert was genuinely baffled why his character wasn’t just stepped on by everyone’s favourite gamma-infused lizard, noting how it would have not only been more fun, but actually made sense given that his character’s whole deal is that they consistently undersell how much of a threat Godzilla is. As such, them being killed by the Big G would have not only been a far better dunk on him, but an ultimately more satisfying conclusion to the character’s arc.

Siskel on the other hand was more annoyed at how flaccid the insult was, writing that he couldn’t fathom why Emmerich would put them both in the film and then not have them get eaten by the titular atomic monster. Which is a fair criticism because come on, if you’re going to put a critic in your monster movie you sure as shit better make sure that they get killed by the monster.