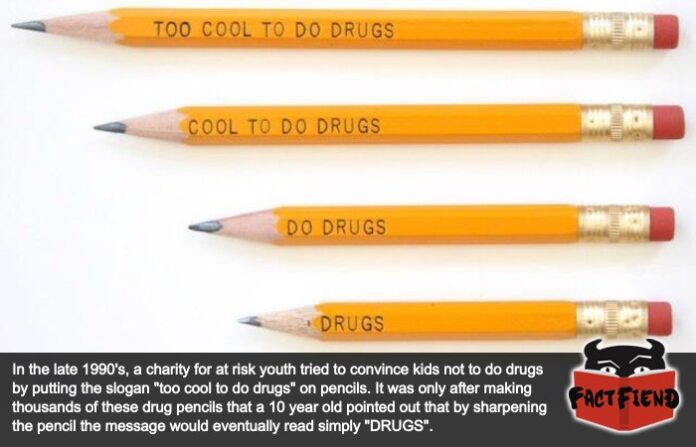 There are a lot of charities whose primary focus is teaching kids that drugs are for fucking losers with varying levels of success. However, few of these charities have messed up as hard as the Bureau for At-Risk Youth who accidentally gave a bunch of kids pencils teaching them that it’s cool to do drugs.

The genesis of this tale begins in the late 1990’s when the Bureau for At-Risk Youth was pondering how they could teach 4th Graders that drugs suck ass and decided that the best way to grab the attention of the PlayStation generation was with, stationary. 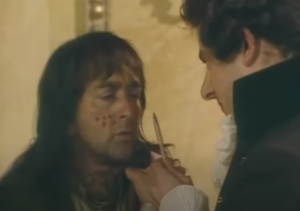 To this end they manufactured thousands of pencils bearing the, Too Cool To Do Drugs, a statement that is ironically super fucking lame because as we all know, there’s nothing less cool than someone loudly insisting that they are.

Anyway, the story goes that after printing all of the pencils the charity boxed them up and took them to an elementary school in Ticonderoga, New York. Reportedly, at no point, using one themselves to ensure that they worked properly because seriously, how hard is it to fuck up a pencil?

As you can see from the image above there was a very obvious flaw with the pencils, mainly that repeated sharpening markedly changed the intended message from TOO COOL TO DO DRUGS to COOL TO DO DRUGS and then to, DO DRUGS and finally simply, DRUGS. Which admittedly, is kind of hilarious.

It gets better though because the mistake wasn’t noticed by a teacher or a parent, but a 10 year old called Kodi Mosier. With Mosier reportedly noticing the mistake almost instantly, much to the embarrassment of everyone at the charity who were forced to sheepishly admit after the fact that at no point did anybody involved notice. A confession that prompted Mosier to later quip, “I guess they didn’t sharpen their pencils“, a withering put down from a 10 year old who clearly didn’t need a fucking pencil to tell him how much of a badass he was.