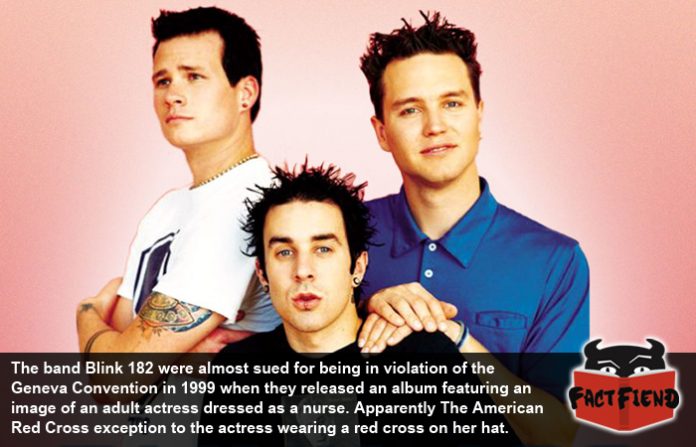 Given that the subject matter of their songs range from expressing a desire to have sex with a dog to simply screaming swear words down the mic for 30 seconds, it’s not surprising that the band Blink 182 have caused their fare share of controversy over the years. But did you know they also once nearly got sued by the American Red Cross?

The incident in question happened in 1999 when the band were putting the finishing touches on their album, Enema of the State, AKA the album your parents felt super awkward about buying you for Christmas. 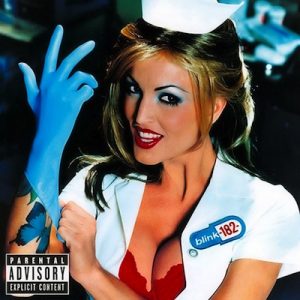 The image above is likely the version of the album most everyone is familiar with and its rightly considered to be one of the most memorable album covers off all time for two reasons.

That nice lady is Janine Lindemulder, an adult actress who was chosen at random by the band to be appear on the album after they browsed through a stack of photos of potential models. Apparently no one from Blink had any idea that Lindemulder had sex on camera for money and they were all apparently very nervous about meeting her. Something that isn’t at all noticeable in any of the publicity photos she took with the band.

So where does the American Red Cross come into this? Well you see when Miss Lindemulder first posed for Enema of the State cover the outfit she was wearing featured two things that aren’t present in the final version we eventually got. A capital B in the band’s name and a small red cross on her nurse’s hat. Both of which are present on the cover of first pressings of the album.

According to the band, they felt that their logo and name looked better when written all in lower case and changed that for the second pressing, leaving the red cross. However, soon after the release of the second pressing the band were promptly cock-slapped by a legal letter from the American Red Cross advising them to change the album cover again to remove the red cross from Lindemulder’s hat or else they’d be in violation of the fucking Geneva Convention.

While the band weren’t violating the Geneva Convention as far as we can tell (there’s a rule about impersonating the Red Cross but we’re pretty sure it doesn’t apply to fictional women who exist only on album covers) the band were sufficiently spooked enough the change the album for a third and final time.

While this may seem kind of ridiculous, it’s far from the only example of a charitable organisation pointing a legal shotgun at the balls of an innocent person or group to get their own way. For example, The Komen Foundation for example has repeatedly sued other fucking charities for using pink while campaigning. The same can be said for the Wounded Warrior Project, who frequently sue other charities dedicated to helping veterans with donated funds for what they perceive as copyright infringement.

But both of those things are way too depressing to think about right now, so in the mean time please enjoy this picture of Blink 182 in their underwear.