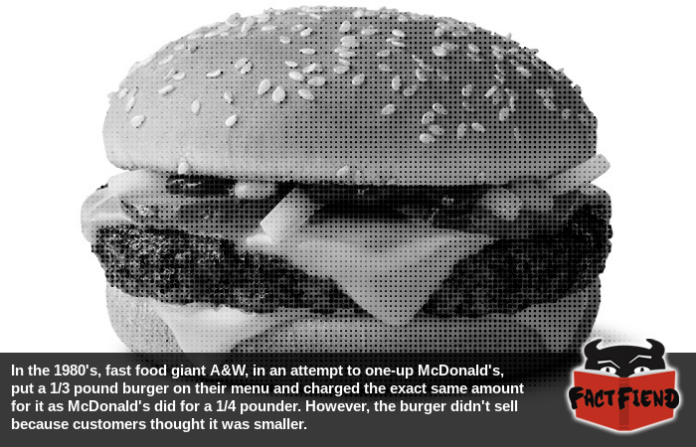 For several decades now one of the most popular items on the menu at McDonald’s has been the Quarter Pounder. Curiously, despite the average consumer steadily growing larger since the introduction of the burger, every attempt to introduce a bigger burger has been a horrible failure due to how fucking stupid the average consumer is.

A menu staple since the 1970’s, the Quarter Pounder was invented when a McDonald’s franchise owner called Al Bernardin noticed that a standard McDonald’s hamburger had an abysmal, and we quote, “meat to bun ratio“. Which, yeah, we get because even the most heavily edited glamour-shot of a McDonald’s burger looks like it has less meat in it than a vegetarian’s dump. 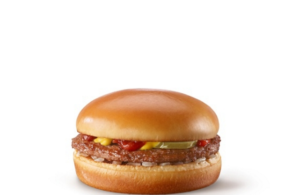 Bernardin solved this by designing a new patty for the restaurant that contained a full quarter pound of beef, slapping it between two buns and adding it to the menu under the name, The Quarter Pounder. An idea that might not sound all that original until you consider that McDonald’s has since managed to trademark the term “Quarter Pounder” meaning McDonald’s can sue the fuck out of anyone trying to use it.

Something to clarify is that while McDonald’s owns the term Quarter Pounder, they don’t own the idea, so while anyone can make a burger featuring a quarter pound patty, they can’t call it a Quarter Pounder on the menu unless they want McDonald’s to send some heavies round to punch their legs off. However, while many companies have created their own take on the Quarter Pounder with mixed results, there are some who’ve tried to top it and failed horribly.

Specifically multiple McDonald’s competitors and even McDonald’s themselves have tried to release burgers featuring 1/3 pound patties over the years, only for the product to flop harder than a donkey with broken legs.

For example, in the 1980’s A&W tried to hoover some of the crumbs from McDonald’s plate with the release of the creatively named, A&W Third Pounder. As if it wasn’t obvious that the burger was designed to be a direct competitor to the Quarter Pounder, A&W sold it at for the exact same price as the Quarter Pounder with some locations even selling it for less.

In addition, A&W conducted endless taste tests that all but confirmed that the average man on the street vastly preferred their burger. However, despite all of this the burger just, didn’t sell. Much to the annoyance of A&W who simply couldn’t fathom why nobody wanted a burger every test they conducted showed people preferred.

In response A&W ordered dozens of focus tests to see what the fuck was going on and were baffled to discover that everyone assumed the burger was smaller than the Quarter Pounder. With it being reported that customers saw the 3 on the advertising marque and assumed that because 3 is smaller than 4, the burger was similarly smaller. As such, the price tag (which remember was deliberately made to be as close the that of the Quarter Pounder as possible) seemed like a rip off. For anyone who still has a little faith in humanity and is hoping that only a minority of people made this assumption, according to the people who ran the focus groups upwards of 50% of respondents thought the burger was smaller. Shortly thereafter A&W quietly removed the burger from their menu, apparently because executives couldn’t figure out how to get across to customers that the burger was bigger without it sounding like they were calling them stupid.

Things get just a little more hilarious though because since then, McDonald’s themselves have tried several times to introduce a burger with a 1/3 pound patty to their menus and had to remove it, reportedly for the exact same reason. Which is amazing.