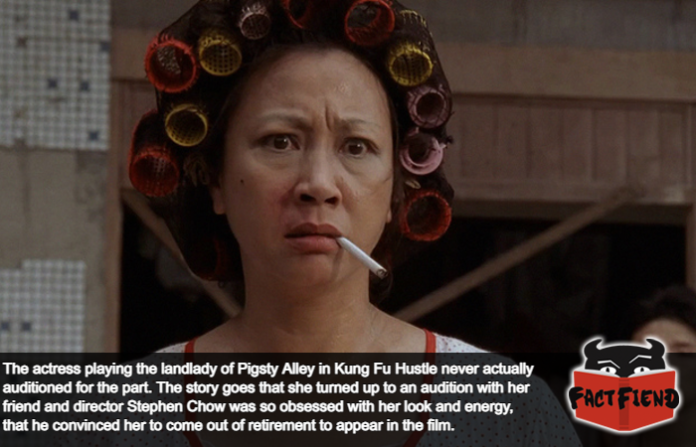 Kung Fu Hustle is a film in which a loveable loser played by Stephen Chow repeatedly gets his shit pushed in by everything from a gang of fire axe wielding dancers in three-piece suits to a cobra. Considered one of the finest comedy films released in the last 20 years, the film was partly created as an excuse to get a bunch of retired martial arts actors out of retirement. Something the film actually ended up doing by accident with the casting of Yuen Qiu.

An actress who cut her teeth in the earliest days of the Honk Kong film industry and is an alumni of the prestigious Peking Opera School which, for the uninitiated is where actors like Sammo Hung, Yuen Wah and Jackie Chan. In fact, Qiu was one of the so-called “Seven Little Fortunes”, which was the nickname given to the school’s most capable students and the ones who the school would rely on for it’s world-famous acrobatic stage shows.

Anyway, the story goes that despite an incredibly capable martial artist and friend of people like Jackie Chan, Qiu found it incredibly difficult to get work. Only having sporadic appearances in obscure martial arts movies as an extra or stuntwoman, with Qiu having to supplement her income working as a nightclub performer who we presume did a lot of backflips.

In fact, one of Qiu’s only notable starring roles was in a Bond movie where she kicks the fuck out of a bunch of karate masters under the watchful gaze of Roger Moore wearing a dressing gown.

After this, Qiu largely left the movie industry to focus on raising a family after becoming frustrated with the limited opportunities offered to women. A fact that reportedly annoyed none other than Jackie Fucking Chan who, alongside Sammo Hung, reportedly and repeatedly offered to help her relaunch her career. Offers, Qiu turned down because she was too busy living smoking and playing mah-jong, seriously.

Anyway, fast forward to the early 2000’s when Stephen Chow was holding auditions for Kung Fu Hustle, a film Chow would later admit he found incredibly difficult to cast because the image he had in his head of each character was so specific. None more so than the landlady of Pigsty Alley, who Chow envisioned as a formidable, chain-smoking, no-nonsense matriarch who was also a secret martial arts master. A descriptor that accidentally ended up describing Qiu perfectly. 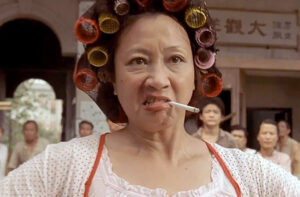 You see, Qiu didn’t actually turn up to audition for the part, but to support a friend who was and spent the entirety of it sat at the back of the room chain-smoking with a pissed off look on her face. An image that immediately enamoured her to Chow who was obsessed with Qiu’s look, which he described as a perfect blend of “arrogant and snobbish“. The problem was, Qiu didn’t want to be in the movie and told Chow in no uncertain terms, to fuck off.

Chow, not wanting to lose his perfect casting, found out where she lived and went to her house where he found her playing mah-jong and smoking with the same annoyed look on her face. Before Chow even had a chance to speak Qiu loudly told him not to interrupt him while she was playing mah-jong. which only served to make him more confident he’d found the woman to play the landlady of Pigsty Alley.

All in all it took Chow several days to convince Qiu, during which time he learned that, just like the character he wanted her to play, Qiu was a now-retired martial arts prodigy. 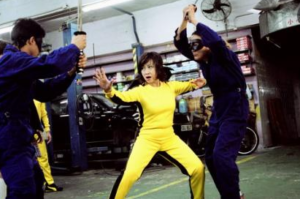 After learning that Kung Fu Hustle was going to star a bunch of older martial arts stars and that it was being choregraphed by her old friend Sammo Hung, Qiu relented and even intentionally gained weight to better and more accurately portray a dumpy housewife. A move that ultimately paid off as it basically revived her career and saw her being cast in a bunch of similar movies hoping to ape the success of Kung Fu Hustle. Which would be kind of sad if it didn’t mean the best character in that movie got a shit-ton more work.