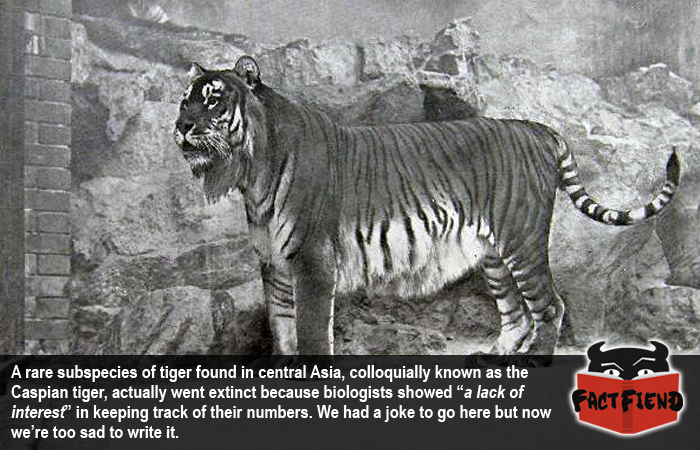 It’s always sad when an animal goes extinct, unless of course the animal in questions happens to be a rare species of testicle eating vampire bat or something. With that in mind it may sadden you to learn that the Caspian tiger went extinct, in part, because biologists couldn’t be bothered to find out how many of them were actually left. In the 90’s!

Yes, despite what the black and white image at the top of this page would suggest, the Caspian tiger reportedly went extinct sometime in the freaking 90’s, with unconfirmed sightings being reported as late as 2001. In regards to that last point, we really feel like we should mention that, that sighting was made through binoculars, from 2 miles away, at night. Then again it was made by a military official who had no real reason to lie about seeing a tiger, so for all we know there could probably be one or two of these things still running about being awesome. However, for all intents and purposes the animal is largely considered to be functionally extinct by the wider scientific community, which is a shame because tigers are kick-ass. Especially when they have epic Gandalf beards like the Caspian Tiger did. 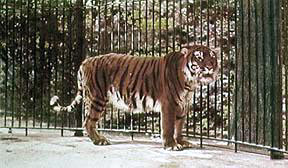 If you’re curious about how we managed to get such a high-quality image of one of these things when they’ve effectively been a myth for the last 50 years, the image above is a re-colored image of the same tiger in the header image at the top of this page. There are in fact, only a handful of images of these animal in existence which we invite you to check out if you think tigers are bitchin’ or just don’t want to read the rest of this piece. We won’t judge, we know we can’t compete with sweet tiger pictures.

Moving on, as mentioned above, the tiger reportedly went extinct some time in the 90’s and one of the reasons supposed reasons why is because biologists reportedly didn’t give enough of a shit to follow up on reported sightings of it. Okay, so we can’t place the blame squarely on the shoulders of those few biologists, but thanks in part to their indifference to the animal, exact figures for how many of these were alive and where they lived were practically impossible to know for sure right up until they were on the verge of being extinct. Which in turn meant that by the time people actually realised, holy shit there are only like 8 of these things left, it was too late to do anything about it and the creature faded into the history books.

Then again, maybe that military official really did see one in 2001 and the tiger is just really good at hiding. 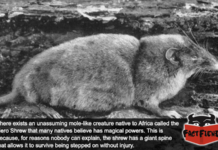