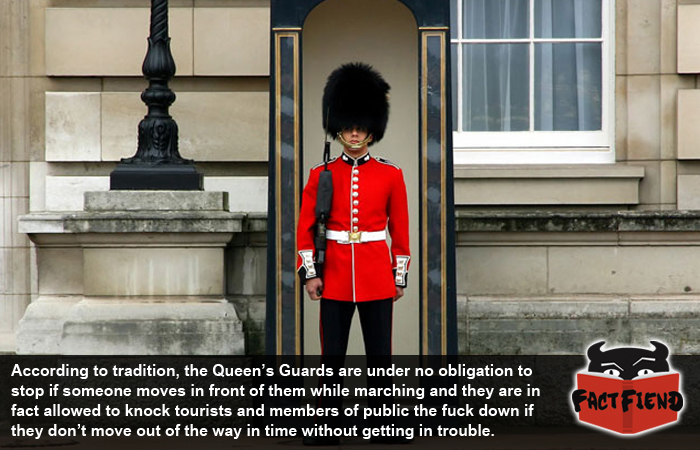 The Queen’s Guards, AKA those guys who wear big furry hats and stand outside the Queen’s house are amongst some of the most well-trained and respected soldiers in the British army and, as you’d expect from guys who can pull off a fuzzy red hat/assault rifle combo, they don’t let people dick them around.

First things first, contrary to almost every piece of pop-culture they’ve ever appeared in, the Queen’s Guards absolutely are allowed to move if they want to and there’s no rule in place saying they can’t touch you as long as you don’t touch them as some films, like cinematic masterpiece Shanghai Knights, claim.

Owing to their status as some of the most trusted soldiers Britain has it its command, Queen’s Guards are largely given autonomy in how they choose to react to external stimuli, though they’re mostly expected to simply ignore most annoyances or act like they’re not even there.

However, if say you got right in a Guard’s grill and started saying that his hat look like King Kong’s dick, the Guard wouldn’t be reprimanded for pointing his gun (which is always loaded with live ammo) right in your fucking face and telling your to step off. Before this the guard is expected to warn a potential annoyance or threat by stamping his feet together and assuming the ready position, but again, these guys are amongst the most respected in the entire British army and are tasked with guarding the life of the sovereign, nobody is going to question their decision to go straight for the “point a gun at the person’s face” option if they felt it was the quickest way to diffuse the situation, which judging by videos like this, it usually is.

Largely thanks to dickhead tourists continually harassing them, the Queen’s Guards are rarely stationed in areas where this can happen anymore, usually standing guard in roped off areas which the public aren’t allowed to enter. However, because the public is mostly composed of, well, idiots, Guards still find themselves having to yell at or threaten people who try to cross them to get photos and stuff. Oh, and if you think the Queen’s Guards will give tourists who potentially don’t speak any English the benefit of the doubt when it comes to dicking around near the fences they’re guarding or something like that, here’s a video of a Queen’s Guard with a gun screaming at a small child to fuck off for touching the fence to shatter that image in the most glorious way possible.

When the Guards are marching, they’re similarly allowed to knock members of the public and tourists who get in their way the fuck down and are under no obligation to slow down to help if the person gets injured, with the only thing they’re required to being to warn the person stupid enough to not notice 40 guys in bright red outfits carrying guns to “Make way!”. The reasoning being that historically, it was considered treasonous to impede the progress of anyone in direct service to the Monarch so why would they bother to slow down now? Again, if you think we’re being hyperbolic about this, please enjoy this image of the Queen’s Guards barrelling through a dumbass tourist without even losing their step.