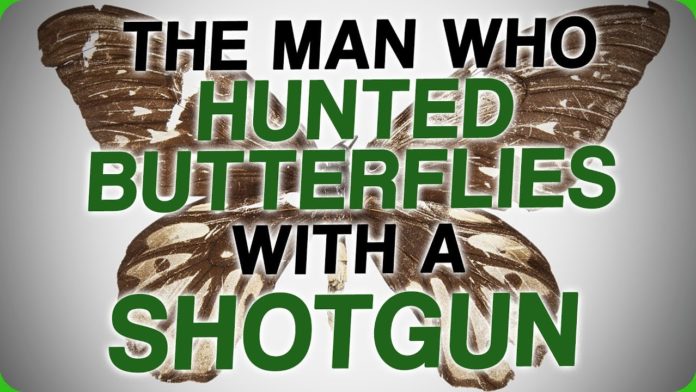 We’re proud to announce that with the publication of this article, this website is two for two on shitting just all over butterflies, a short while ago we talked about how Nikola Tesla used to set them on fire and today we’re talking about a man who hunted them with shotguns.

That man was one Albert Stewart Meek, an Edwardian naturalist who apparently hated nature enough that he dedicated his life to killing it so that he could send it to museums for like-minded scientists to rub their balls all over. We of course kid, in actuality Meek was a respected scientist responsible for expanding our current knowledge of the natural world immensely and for capturing some of the more bizarre examples of life our planet offers. The fact he’s also responsible for then shooting that life in the face with a shotgun is of secondary concern.

Meek is personally responsible for sending dozens, if not hundreds of animal and insect specimens to the both the British and American Museums of Natural History and he has over 20 different kinds of bird and insect named after him, most of which he is credited with first discovering. He also, had a fucking glorious moustache.

The story we’d like to tell concerns an expedition Meek went on to the island of New Guinea at the turn of the 20th century to discover and then shoot strange new animals and insects. During this expedition Meek was astounded when he happened across what we know call the Queen Alexandra’s birdwing, a gigantic butterfly almost a foot wide. Meek as a man of science immediately recognised the value of such a specimen and vowed to capture one, however there was a rather big problem. You see, due to its size, the Queen Alexandra’s birdwing can fly pretty much wherever the damn well shit it wants and usually spends most of its time flying high in the air amongst the canopies of trees. Which is probably a good thing because can you imagine how freaked out people would be if a butterfly with giant, hand-sized wings decided to fly around at face level?

After trying and failing to capture a specimen using the traditional methods available to him at the time, which mostly involved staring slack-jawed at the sky hoping not to get covered in butterfly shit. Meeks eventually got so pissed off that no specimens would descend below a hundred feet that he eventually grabbed a shotgun and begun firing wildly into the air any time he saw one.

Now Meeks wasn’t a monster so he didn’t shoot the butterflies with a proper shotgun, that would be barbaric and probably result in the butterfly being blasted into a cloud of confetti and and butterfly testicles. He instead used custom-made one that fired ultra-fine buckshot specially made for killing the smallest and most adorable birds. This specilised gun allowed Meeks to finally capture a (mostly) intact Birdwing which he sent back to Britain with his notes.

But here’s the best part, Meek is also responsible for capturing one of the earliest known specimens of another giant butterfly known as the Goliath Birdwing, which he also killed with a shotgun. Amazingly, both of these specimens are still housed in museums today and yes, you can totally see that the bullet holes.

So if you happened to be feeling sad today, just remember that when a scientist first encountered the biggest butterfly in the world, his reaction was to stare in amazement at its beauty, before shooting it with a shotgun.