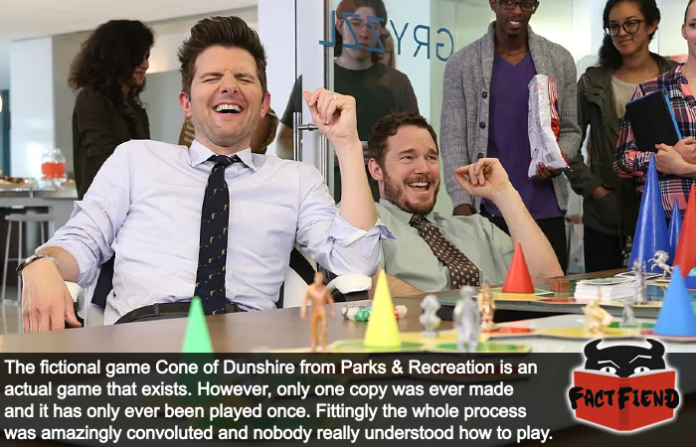 The Cones of Dunshire is a fictional game devised by the character Ben Wyatt from Parks & Rec during a moment of his life we at the site feel is more and more relatable with each tick of the cosmic clock. A burst of creative output following a personal crisis that ultimately ends with everyone around him being all “yeah, you sure you’re okay bud?” through forced smiles more insincere than the one smeared across Pagliacci’s face. It also ended up being real because nerds are weird like that.

Within the context of the show The Cones of Dunshire is portrayed as being impossibly complex with a rule-book thicker than the comic sans version of War & Peace. In fact, much of the game’s time on screen is spent playing up how ridiculously convoluted it is, with virtually every gimmick from the tabletop games it’s inspired by being incorporated and then turned up to 11. Like dice, which the game uses like 40 of at once and are apparently thrown with the kind of care given to a bucket full of warm Pepsi being haphazardly tossed into a lazy roommate’s bathroom.

Now, while it would appear that the show just grabbed a bunch of random shit, piled it up on a table and called it a day there is some consistency between all of the game’s appearances on the show in both how it looks and plays. This is because the game was designed, in part, by the company Mayfair who are perhaps best known for making Settlers of Catan. Another game that’s infrequently name-dropped on the show and the character Ben is a fan of. Because he’s a huge fucking nerd, as shown by this image of him crying dressed like Batman.

Anyway, after creating all the props for the show, Mayfair began receiving a lot of requests to make an actual, playable version of the game despite the fact the logic of the show itself would make such a thing virtually impossible. In part, because the show goes out of its way to poke fun at how the game’s rules are an impenetrable, labyrinthian mess. A Gordian knot of contradictions and nerdish word salad. Then again, these people make Settlers of Catan so it’s not like they weren’t at least familiar with that sort of thing.

The problem was, that although the game plays a somewhat major role in a few episodes of the show, there’s never any sort of internal consistency to how it plays. Which is supposed to be the joke but whatever. As a result, when the company did try to make a playable version of the game, they had to try and strike a balance between making something that fit the chaotic tone established by the show and something people could actually play without looking like every other character on the show when they hear about it. 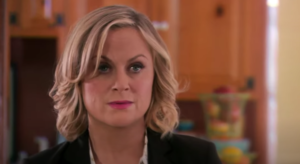 In the end, the company created a game so complex that they realised they’d never be able to actually sell the fucking thing so settled on a one-off charity tournament using giant fuck off cones. To date, this charity event, Gen Con 2014, was the only official tournament ever held meaning someone out there can claim to be the most conely and it’s likely nobody will ever be able to take that title away from them.