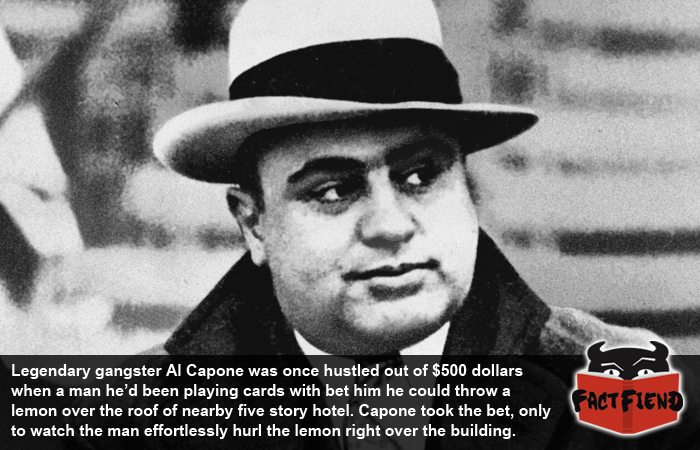 Al Capone has singlehandedly served as the inspiration for some of the most terrifyingly badass crime lords in fiction, which is why we’re just so happy to tell you about the time he was scammed out of $500  by a lemon.

The story goes that after a long night of gambling, liqueur and generally enjoying life as a untouchable crime kingpin with vast, unending resources, Capone was approached by one of the men he’d spent his night gambling with who then proposed a rather unusual wager. The man, whom Capone had never met before that night, drunkenly bet the stodgy malefactor that he could throw a lemon from a nearby fruit-grocers’ cart clean over the roof of an adjacent 5 story tall hotel.

Capone, not seeing how any mortal man could lob a hunk of yellow citrus that far, agreed to the wager and hastily shook hands with the mysterious, lemon-holding stranger, smiling to himself about how he was soon about to be owed $500 by some dipshit who figured he could force a piece to break away from the Earth gravitational pull with his throwing arm.

After finalising the terms of the wager, Capone then stood in awe as the shadowy figure he’d only just formally met, then picked up a random lemon and hurled it clean into the stratosphere, well past the roof of the hotel. A dumbstruck Capone then silently handed over $500 of his hard-earned, ill-gotten gains to the man, who disappeared as quickly as he’d appeared.

As it turned out, the stranger Capone had been so keen to bet against was a legendary street hustler known as Titanic Thompson, a man who’d made a fortune rinsing rich assholes with almost identical bets. Unbeknownst to Capone, the day before the bet was made, Thompson had planted a lemon filled with buckshot onto the grocers’ cart, giving it enough weight for him to throw just over the nearby hotel’s roof.

What makes this story even more hilarious is that Thompson was fully aware of who Capone was and what he was capable of when he decided to hustle him out of his money, he just didn’t give a shit because he wasn’t worried about Capone ever finding out that he’d been conned. Which is impressive when you realise that Thompson had used the exact same scheme to swindle countless other people in the same area out of their money, only instead of a lemon, he’d used a fucking watermelon. Capone could have literally figured out the scheme in seconds by just asking his men if they’d heard any rumours of people hucking fruit into low orbit recently, but instead he paid up and never gave the fact he’d clearly been conned out money any more thought.

So the next time you feel sad, just remember that a man who partly made his living hurling watermelons over people’s roofs, once hustled Al Capone out of $500 dollars, with a lemon.