The Texas Chainsaw Massacre was a watershed moment for film, mainly because of the copious amounts of hyper-realistic ultra-violence shown off throughout. As it turns out more of this than you’d expect was real, largely because the guy playing Leatherface, Gunnar Hansen, couldn’t be arsed in most of his scenes.

For starters let’s talk about the scene in which the character of Sally is strapped to a chair and has her finger sliced open so that a old-ass looking man nourish himself on her sweet teenager blood. You know, this scene. 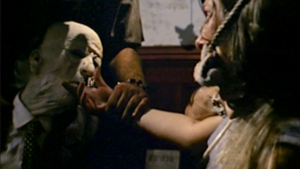 That effect was supposed to be achieved via a rudimentary series of tubes hidden along the actress’ arm ending at her fingertips, through which fake blood was supposed to be pumped when Gunnar “cut” her finger with a knife. While the knife Gunnar was using in that scene was 100% real, it was dulled with tape allowing him to run it along the actress’ skin without hurting her, at which point the effects crew were supposed to begin pumping fake blood through the tube. The problem was the heat on set caused the fake blood to coagulate and get stuck in the tube and after multiple takes Gunnar decided “fuck this” and opted to simply do the stunt for real.

Not wanting to bother with any of that permission nonsense Gunnar waited for a break in filming and quietly removed the tape from his knife and patiently waited (in full Leatherface costume) for the cameras began rolling again. As soon as he was instructed to started acting Gunnar then roughly grabbed the actress’ finger and sliced it the fuck open. Since this was the only usuable take they got that day the shot of course made it into the movie and the actress’ look of fear is genuine, because you can’t fake this kind of scream-acting. 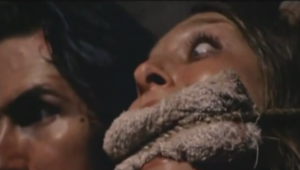 Speaking of that scene, it’s probably worth noting that the big ol’ hammer wielded by the afforementioned old-ass man a few minutes later was also real and the actor was genuinely at risk of accidentally clocking the actress right in the melon and killing her when they filmed this part specifically. 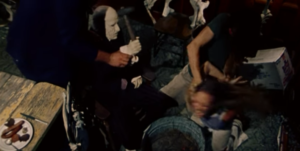 For another scene calling for Gunnar to cut someone’s head right the fuck off with a chainsaw, the actor once again decided against doing things the long way went right ahead and put actual running chainsaw inches away from another actor’s head because it was easier.

While this sounds dangerous, the risk to the actor was fairly minimal, something that can’t be said of scenes calling for Gunnar to run around in full costume with the chainsaw, which he similarly decided to do for real. Amazingly despite the fact one of these scenes called for Gunner to chase someone around in a vision obscuring mask, in high-heeled boots while carrying a running chainsaw at night …

The actor would later recall that the most difficult aspect of filming the chase scenes was the fact that the actress he was chasing ran too slowly meaning the only reason Leatherface isn’t rage-sprinting at cheetah speed in all of those chase scenes is because the other person in the scene was too slow.

But we’re not yet because the chainsaws and blood weren’t the only things in that film that were real. Pretty much all of the shit lying around on set was too. For example in a book chronicalling the making of the film Gunnar notes that most of the human bones seen throughout the film were real, apparently because it was cheaper to buy real skeletons from India wholesale than it was buy fake plastic ones. While this is admittedly kind of gross, we’ll bet there’s an Indian guy’s ghosts somewhere out there that’s hype as shit that his skeleton got turned into a sick-awesome bone lamp. 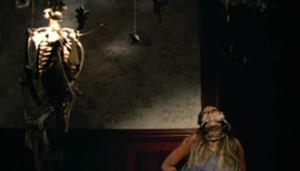 When dressing the sets it was similarly discovered that actual animal blood was cheaper than fake blood, prompting the art director to buy gallons of the stuff and throw it all over for scenes requiring it. According to Gunnar most of the animal carcusses and bones seen throughout the film were also real and were similarly sourced from slaughterhouses and in some cases, the sides of the fucking road. By the actor’s own estimation the film contained only 10 plastic bones, with the rest being sourced from everything from actual human skeletons to dead dogs the director found near the set that had been hit by cars. While it’s not clear if the director himself ran these dogs over, given what else we’ve learned today we wouldn’t be surprised to learn that he did.

Something you may want to keep in mind if you ever find yourself watching this film again.