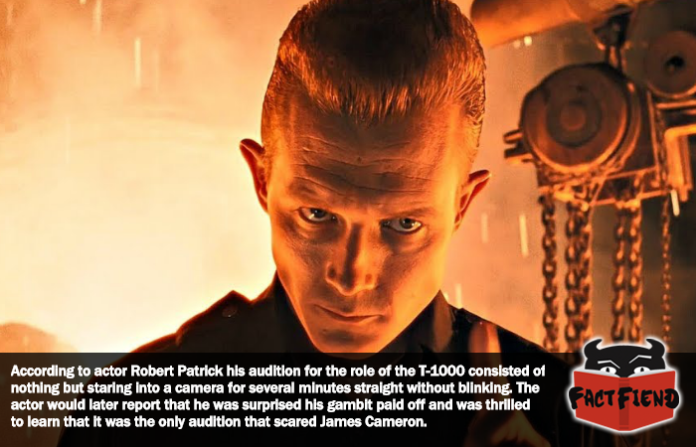 The T-1000 is among the scariest and most eminently recognizable villains in pop culture. It’s a tireless killing machine that can run forever before assuming the form of a loved one and stabbing you in the dick, with it’s own dick. It’s also a role Robert Patrick landed by staring.

First though, the origins of the T-1000 because they’re kind of hilarious. You see, while brainstorming ideas for a potential adversary for Arnold Schwarzenegger’s character, the T-800, in Terminator 2 it quickly became apparent that simply going bigger and badder wasn’t an option. which makes sense because Arnold Schwarzenegger was already the width of a fridge when those movies were being made and the first film had already established that Terminators were purportedly designed for infiltration.

As such the T-1000 was envisioned as being a more agile kill-bot with James Cameron quipping that if the T-800 was a tank, the T-1000 was a Porsche. To sell the idea on the T-1000 being an upgraded model it was given a host of abilities better suited to infiltration and covert murder than just being quite large such as instantaneously altering its appearance or turning its fingers into knives.

When it came to casting the T-1000 Cameron had a very specific look in mind, so specific in fact that all of the concept art of the thing is based on exactly one guy, Billy Idol, no really. Apparently Idol was ready to accept the role but accidentally fell off a motorcycle shortly before filming began, necessitating a recast. Enter Robert Patrick.

Knowing that the character was an unfeeling killing machine from the future Patrick surmised that saying absolutely fucking nothing would be the best way to show that he was the man for the role. As a result when he was asked to show a producer what he had in mind for the character, he simply turned to the camera and stared directly into it for several minutes straight without blinking. 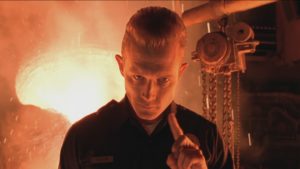 James Cameron would later be quoted as saying that of all the auditions that day, Patrick’s was the only one that unnerved him so he got the role. Not content with scaring the shit out of the director Patrick spent several weeks learning to run without appearing to breath and during his weapons training learning how to fire guns without blinking and with both hands. His reasoning being that a machine wouldn’t favor one hand, but simply do what was most efficient.

In regards to the now iconic T-1000 sprint, Patrick trained in secret so that none of the cast or crew knew how fast he could run and so that the sudden burst of speed displayed by the machine as it gave chase in the scene pictured below would evoke a more genuine reaction.

The thing is, Patrick may have trained just a little too hard because on the day he debuted The Run he ruined the shot by catching Edward Furlong (who remember was riding a fucking motorcycle in that scene). To adjust for Patrick’s sprint speed the flummoxed crew had to reset the entire shot and shorten the timing on all of the stunts they’d set up, later revealing to him that he was sprinting at roughly 15 mph during the entire scene. A speed that, sure, is nowhere near as fast as a professional athelete could go over the same distance but remember, Robert Patrick was running this fast in full police uniform without showing any outward signs of fatigue and whilst also pretending to shrug off a shotgun blast to the face. 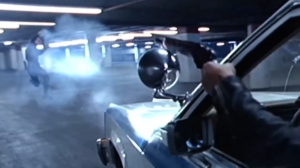 So yeah, we’ll call it about even.