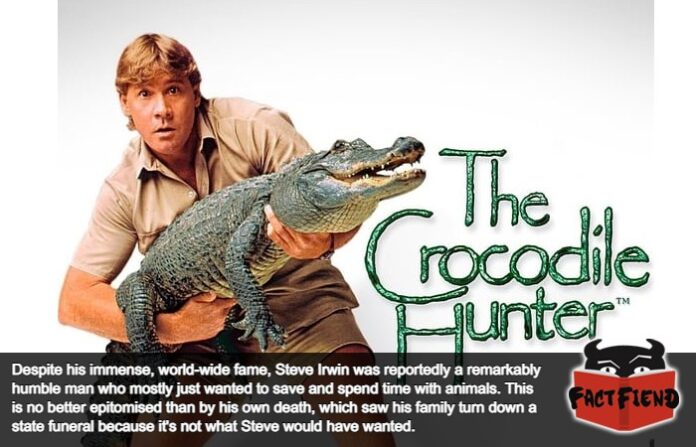 Steve Irwin was a man who dedicated almost his entire life to the conservation and protection of Australia’s varied endemic wildlife as well as suplexing large crocodiles for a crowd of paying customers. A remarkably humble man, Irwin famously disliked formality to the point his own family turned down a giant fuck off funeral in his honour.

As an example of how little Irwin cared for proper decorum or anything that didn’t directly involve either an animal or, as we’ve covered before, kicking the shit out of Vin Diesel, Irwin was known to wear his trademark khakis for literally everything to the point his own wife has noted that he would have likely worn them for his daughter’s wedding.

In fact, Steve’s commitment to khaki was such that he went as far to wear them for everything from formal events as well as virtually every interview he ever took part in. The only exception to this being a 2005 interview with Conan O’Brien wear he turned up in an outfit that can only be described as “Dad at his son’s rugby game“.

Even then, this is something Irwin himself comments upon the moment the interview starts, noting that he was only begrudgingly wearing jeans because he was currently filming a show that involved observing surgery on large animals and the vets told him shorts were unhygienic. Meaning this is Irwin’s idea of dressing up. 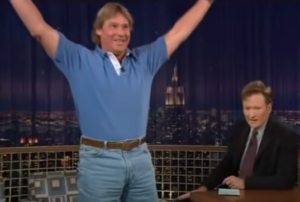 Hell, Irwin even surfed in khakis, being filmed doing so for a TV show on which he predictably spotted a deadly venomous snake underwater that he decided to grab and then put on his head.

Amusingly, Irwin’s love of khaki shorts ended up causing problems for his wife and kids years after his untimely death, with a TV executives having to hire a professional stylist for the family when it emerged they literally didn’t know what else to wear besides tan.

Something that’s kind of understandable when you consider that following his death, Irwin’s memory has been honoured, in part, by the wearing of khakis. Australia Zoo even gives people a discount for turning up in them.

By far nothing sums up the complete and utter lack of fucks Irwin gave about anything beyond animals and his family though is that shortly after his death the then Prime Minister of Australia offered to give him a State Funeral. Something normally reserved for important dignitaries and heads of state, not men who wrestled crocodiles for a living. Though if we’re honest, we kind of wish it was.

However, Irwin’s own father firmly rejected the offer, telling the PM that Steve would have preferred to be remembered simply as, in his words, “an ordinary bloke“. Also, we can’t imagine a staunch supporter of the environment like Irwin would have approved of that amount of money being spent parading his corpse through the streets when it could be spent on other stuff like, we don’t know, protecting Australia’s wildlife. Something we always figured it was pretty clear was Irwin’s only real motivation in life but we guess it’s hard for politicians to avoid using something like the death of a beloved national treasure for their own political machinations. We mean, if they really wanted to honour his memory they could have passed legislation to protect wildlife or get eaten by a crocodile.