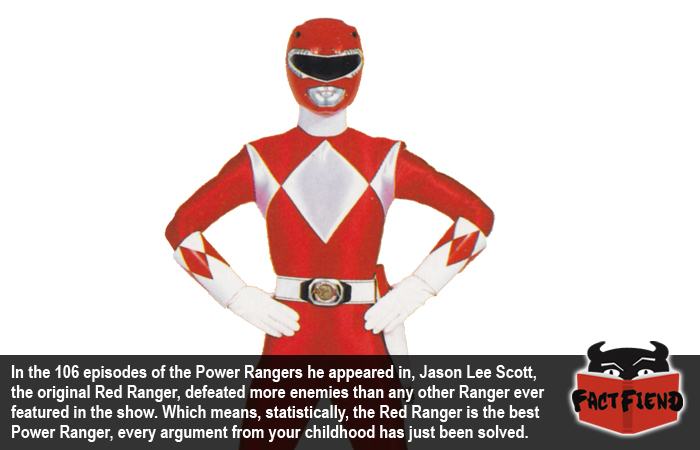 Arguing about which Power Ranger kicked the most ass was practically a sport in the 90’s, but which we mean, it resulted in tons of arguments and fights that never really solved anything. As it turns out, the original Red Ranger was the best character and there’s math to prove it.

Firstly, for the 8 people who don’t know who the Power Rangers are, but still clicked to read more about them, the Power Rangers are a bunch of teenage superheroes who fight aliens in a color-coded Lycra jumpsuits and giant animal themed robots. Though the premise sounds stupid and impossibly dope, it was popular enough to spawn an entire franchise with dozens of spin-off shows starring a multitude of fabulously well coordinated martial artists.

Now with this many awesome characters, it’s inevitable that kids would argue about which one is the best because kids are stupid and hate math.

However, if you look at the question logically, the best Power Ranger of all time turns out to be Jason Lee Scott, AKA, the original Red Ranger from the Mighty Morphin’ Power Rangers. This is because, according to people who spend way more time counting stuff than we do, the original Red Ranger defeats more enemies in one on one combat than any other Ranger in the series. Keep in mind this is a series that’s supposed to be about teamwork, which means the original Red Ranger is so badass the list of feats he accomplished on his own surpassed that of the list of things he achieved surrounded by people with access to giant dinosaur shaped robots.

To make the original Red Ranger more impressive, he’s also noted as being one of the few people able to stand toe-to-toe with Tommy Oliver, who you may know as the White Ranger.

Basically what we’re trying to say is that all of the arguments you had as a child about which Power Ranger never stopped snapping necks and cashing checks were pointless, because the numbers say that the answer is the Red Ranger. If we ever get a time machine, we’re going to print off this article and slap our younger selves with it until we fade into the ether because damn did we waste a lot of time arguing about this.