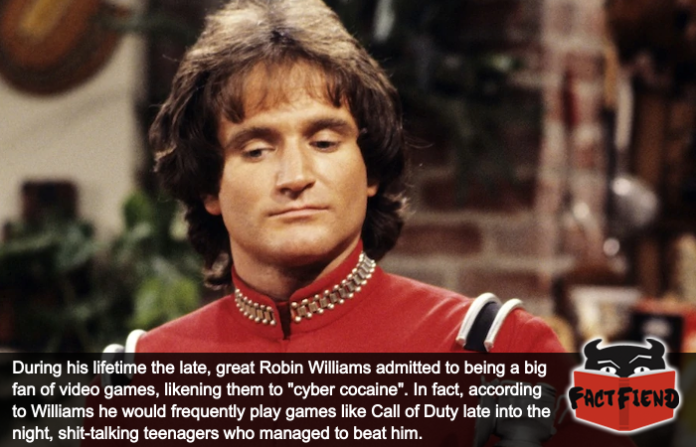 Few actors could ever hope to have a presence as commanding as that of Robin Williams, a man who was literally kicked out of the most prestigious acting school on Earth because he was simply too good. As it turns out Williams wasn’t just a skilled actor, but gamer as well, reportedly spending many a night quickscoping teenagers in Call of Duty as a way to relax and unwind.

Before that though, for anyone unaware, yes Robin Williams willingly left the world famous Juilliard School of performing arts after he was told point blank that there was nothing left that the esteemed institution could teach him. The school later gave Williams an honorary degree which we’re sure the multi-Academy Award nominee needed to prove his acting chops.

Anyway, a man who was always open about his vices and the things he used to overcome them, Williams famously credited cycling of all things with helping ween him off cocaine. A sentiment that has us questioning either how good cycling is or how much cocaine Robin Williams did in the 80’s to become that numb to its effects. Something that’s surprisingly easy to gauge by simply looking at any publicity still of Williams from that time.

Another, lesser known vice of Williams though was video games, with the actor being a staunch proponent of the medium as an art form as well as a casual fan of a wide variety of games. The most famous arguably being the Legend of Zelda series, which Williams was such a big fan of he literally named his daughter for it. A move that ended up being acknowledged by fucking Nintendo itself when the company put the pair into an ad for a remastered version of the game that inspired Williams to pick the name in the first place. For the curious, Williams called Ocarina of Time not only the best game in the series, but of all time. Which is accurate and proves that Robin Williams had a very large penis.

But Williams wasn’t just a Nintendo fan, with the esteemed actor reportedly having a sweet-ass gaming set up in his house filled to the brim with latest games and systems all hooked up to a TV big enough to play tennis on. All of which Williams played the everloving shit out of, often to his own detriment.

For example, Williams would frequently play games like Call of Duty for hours at a time ultimately describing the game as humbling. When once asked why Williams simply responded –

“Because getting my ass kicked by an 11 year old is very humbling!”

Williams was even known to play the game with actual soldiers during his frequent trips to entertain American troops overseas, noting that he was astounded that men who literally lived in war zones would relax by shooting people in virtual ones.

Getting back on topic, while Williams was known to play video games to relax, he did admit to getting frustrated quite often and in those moments would turn on his mic and shit-talk the people he was playing with. A fact that only reinforces the already cast iron reputation of Williams as a fucking legend with sweaty, Dorito-dust covered rebar soaked in Mountain Dew. Especially when we reveal that Williams also watched a fuck-ton of anime on his baller-ass gaming setup. Making him a hero and possibly a legend in nerd terms.

Now while it’s unclear if Williams would do any of his trademark voices whilst tea-bagging rowdy teenagers, considering his most iconic role was simply his own voice and personality, but animated, it means countless people out there were told to eat shit by the Genie from Aladdin and had absolutely no idea. Something we imagine Robin Williams found very funny. 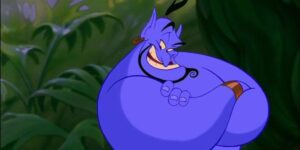