Watching a high-level game of snooker is sort of like watching a game of pool being narrated by David Attenborough. It’s slow, deliberate and the official governing body is kind of up its own ass, which has led to some fucking hilarious “controversial moments” over the years.

For example, like any other sport, snooker has strict rules about uniform and what players can and cannot wear. Unlike other sports though that uniform consists of a dress shirt, waistcoat and bow tie and while nobody is going to argue that doesn’t look fly as balls it does kind of pose a problem for players wanting to make the kind of shots where they have to physically mount the table.

That player is Ronnie O’Sullivan, who after making a move like that in 2014 found that his shirt had become untucked, as is wont to happen when you’re trying moves straight out of the kama sutra on 20 square feet of wood and baize. After spying the untucked shirt, the referee asked O’Sullivan to tuck it back in, to which he responded with an emphatic, “no” and continued playing. The referee gave such a huge shit about what would have been in any other scenario, a minor incident, that he had O’Sullivan slapped with a £1000 fine for being disrespectful. This is by no means an isolated incident, at least as far as O’Sullivan is concerned.

You see along with being considered one of the naturally most talented snooker players in the world, O’Sullivan is also considered one of the more controversial for his seeming lack of giveable fucks. In 2015 O’Sullivan complained between frames that his shoes sucked a considerable amount of balls and were hurting his feet, when nobody seemed to care, he took them off and began playing in his socks. Within minutes a high-level representative of the snooker governing body was on the scene with a new pair and some harsh words for the Englishman.

On another occasion O’Sullivan enquired what the prize pool was for scoring a 147 break, essentially the best possible score in snooker and something only a handful of players can achieve consistently, moments before he was set to pot the final ball that would give him that score. Upon being told that the prize was only £10,000 (it had previously been more than double that) O’Sullivan deliberately flubbed the shot, told the referee it wasn’t worth it and swaggered off. Again the snooker governing body went ape shit despite the fact O’Sullivan’s antics and their overblown reactions to them were getting them more column inches than if he’d whipped his dick out mid-game and tried to pot with that.

O’Sullivan has similarly been raked over the coals for lightly slapping his cue against the table after missing what for him, should have been a piss-easy shot to make, but hey we’ve all been there right? British papers reported on this like he’d baseball swung his cue at the fucking referee’s face, writing hyperbolic headlines like “O’Sullivan nearly snaps cue in half!“. O’Sullivan was again fined for the incident and criticised for bringing the sport into disrepute. As an aside, O’Sullivan actually did once snap his cue the fuck in half while playing on the pool circuit in America, terrified of being kicked off the tour he’d been specifically invited to, O’Sullivan tried to hastily apologise, only to be cut short by the event organiser who told him to do it more. Why? Because that shit makes for great TV.

O’Sullivan’s most controversial moment by far though was the time he beat a Canadian player called Alain Robidoux using his left hand, which Robidoux felt was disrespectful. O’Sullivan, who is ambidextrous, countered the claims by telling organisers he was better with his left hand than Robidoux was with his right. For once in his life O’Sullivan was able to avoid being hit with a big-ass fine by proving this fact in a contest set up where he had to play a former world champion with his left hand. O’Sullivan proceeded to slowly and methodically turn said champion’s asshole inside out using his left hand, at which point everyone involved was forced to admit maybe he was just that good.

Perhaps the event that encapsulates how stuffy and up their asses the snooker world is though is what became known as the “chalk incident” or chalkgate, (yes they used the fucking “gate” suffix). Basically before taking a shot O’Sullivan chalked his cue, placed said chalk on the table to line up a shot and then forgot to remove it from the table, an honest mistake we’re sure any of us could made and something that on the surface, doesn’t seem like all that big of a deal. It was considered a HUGE deal. The incident caused a firestorm amongst snooker fans and officials because it was a blatant infraction of the rules which state nothing can be left on the the table. Rather than moving past it because, come on, who really gives a shit? The incident became a whole thing with O’Sullivan once again being asked to apologise.

Gee, it’s no wonder this guy is known as the unhappiest snooker player in the world, all he wants to do is play a game he loves and assholes seem to be making it their mission to suck all the fun out of it. 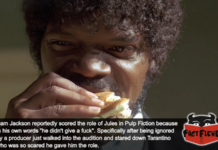