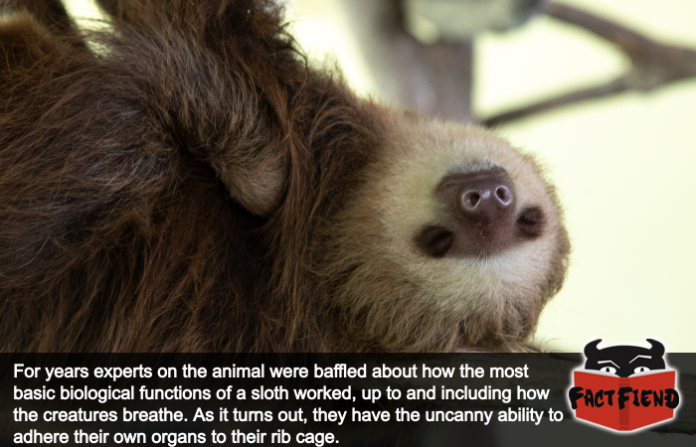 As we’ve discussed before, erm, twice, sloths are a biological curiosity even seasoned experts on the animal often struggle to identify whether they have a dick or not. But it’s not just the animal’s dongular fortitude that experts struggle with, but pretty much every aspect of their basic biology to the point we really don’t know how they breathe.

To be clear, we know that sloths have lungs and shit, it’s just that nobody is really quite sure how sloths are able to breath when they spend the majority of their time horizontal. 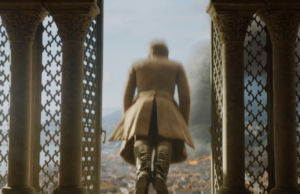 Specifically, sloths are reportedly upside down about 90% of the time, most of which is spent moving about as much as Drax queuing for an iPhone. Something that would be horrifically uncomfortable if not outright lethal for any other mammal and sloths don’t even seem to give a shit. So what gives?

Well, contrary to their appearance and reputation, sloths are remarkably hardy creatures that are comically well adjusted for life spent upside down and about 400 feet up. For example, sloths have several extra vertebrae that allows them to turn their head almost all the way around and have remarkably dense musculature that allows them to walk off, albeit very slowly, heavy impacts. Which is handy given sloths apparently fall out of trees like the dumb little shits they are, all of the time.

Anyway, one of the more curious quirks present in sloths are fibrous muscles that seem to connect the majority of their major organs to their skeleton. 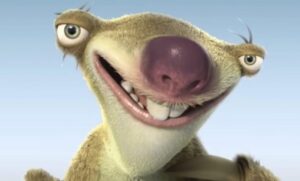 A discovery that was hailed as a major breakthrough in understanding how the fuck sloths survive because prior to this experts were baffled how a creature that barely fucking moves dealt with the extra energy expenditure that would naturally arise from having every single one of its internal organs sit on top of its lungs. With it being surmised, anchoring its organs in place saves a given sloth a small, but critical amount of energy allowing them to spend even less time moving around.