Zootopia is an animated children’s film about a cute little bunny that becomes a police officer. It’s also a thinly veiled allegory for racial discrimination but we don’t have time to talk about that because we need to discuss gazelle booty.

You see, one of the more popular characters to come from the film is a gazelle called, erm, Gazelle. Within the context of the Zootopia universe Gazelle is a singer and mammal rights activist who is near-universally loved and adored by all of the citizens of Zootopia including a permanently pissed off anthropomorphic buffalo voice by Idris Elba.

As noted above, Gazelle is voiced by the singer Shakira who apparently signed on to appear in the movie almost immediately after meeting with directors and realising she’d get to voice a sexy gazelle. She may have also said something about agreeing with the central message of accepting people for who they are present in the movie as well, but we’re assuming the gazelle thing also played a big part in her accepting the role.

Prior to meeting with Shakira the conceptual drawings for Gazelle were pretty much done and are similar to the final design seen in the film, save for a singular difference. Proto-Gazella has an ass flatter than an omelette cooked in that gravity chamber Vegeta trains in, in Dragonball Z.

Shakira took one look at the conceptual designs and insisted on one major change before she’d voice the character. Give her a slamming body. Shakira especially wanted the character to have fuller hips to better embody her own curvy figure, in addition to more sultry features. It didn’t matter that Gazelle’s design was based on that of an actual fucking gazelle which are rake-thin in reality, Shakira wanted the character to have an abundance of ass so the animators had to make it so. With this prompt in mind the artists and animators working on the film gave Gazelle’s design a once over to make her look more like the singer, even going as far as dressing Gazelle in an outfit similar to one Shakira herself had once worn on stage. 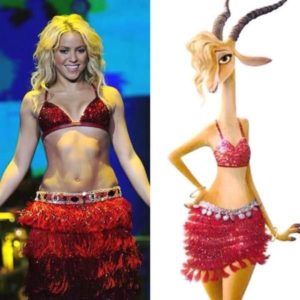 We will never apologise for posting that image because it’s fucking hilarious, but if you want something to wash the image out of your mind, here’s sexy gazelle Shakira breaking it down.