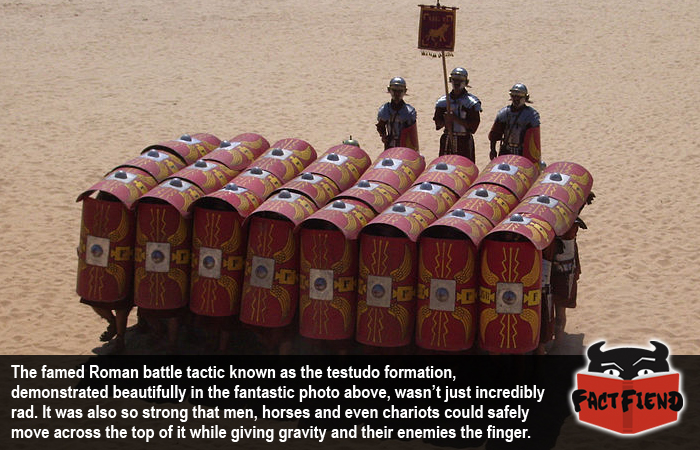 The testsudo formation, AKA, the tortoise, is probably one of the most famous military manoeuvres in history right behind flying directly into the enemies death cannons to clog them with wreckage. Along with looking ridiculously cool, the formation was also so strong that it could double as a bridge.

By locking their shields together like in the image shown above, a group of Roman soldiers were practically invincible to all known forms of attack of the era, upto and including dog poo on a stick. It was that good.

Though pop culture has largely demonstrated that the formation was only used to protect men, it also came in handy when pack animals, such as horses or even donkeys needed protecting. Adorably, such animals were trained to kneel whenever to order was given to assume the formation of a literal box of ass-whupping. In other words, when you next see the testudo formation in any form of pop-culture, there’s a very strong chance that there is a donkey laden with supplies just off screen.

In The Book of Roman History written by, Cassius Dio, the following passage is written in regards to the testudo formation.

“it is so marvellously strong that men can walk upon it, and whenever they come to a narrow ravine, even horses and vehicles can be driven over it”

Just in case you have that really rare form of dyslexia that stops you from reading sideways letters, Dio basically states that the formation was so strong that it doubled as a bridge that could support everything from men to chariots full of fucks the Roman’s couldn’t be bothered giving away. Dio also goes on to state that the testudo formation allowed Roman soldiers to double as a portable step ladder, so that their comrades could stand on it to climb over low walls, shoot arrows or generally raise the roof like those dickheads who dance on tables in nightclubs. Only better, because this table was made of 50 men armed with swords!

Oh, and for you you word nerds out there, “testudo” was Greek for tortoise, in case you were wondering.

Bitchin’ image of the testudo formation courtesy of Neil and Kathy Carey. 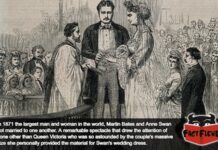 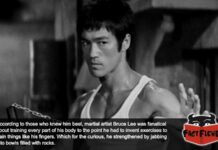 Bruce Lee trained by punching rocks, with his fingers