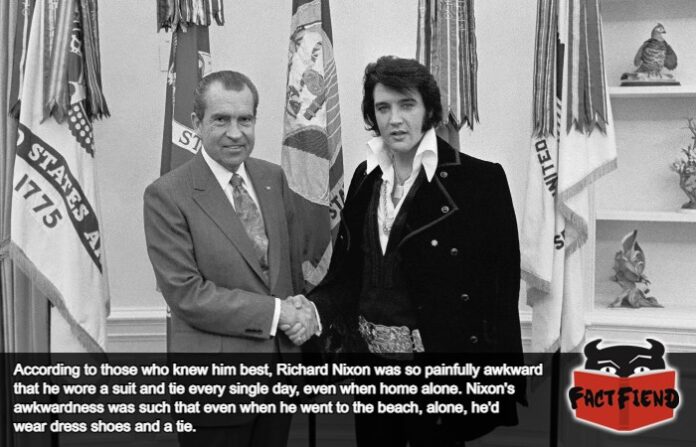 Richard Nixon is one of those figures from history who’s been so widely and thoroughly dunked upon by popular culture it’s hard to know as a casual observer of history what he was actually like as a man. As it turns out Nixon was an awkward dork who quite literally did not know how to relax.

First though for anyone unaware of just how long pop culture has spent shitting on Nixon from a great height, you only need to consider that one of his biggest, lasting contributions to culture is his middle name. A name which Simpsons creator Matt Groening once described as “the most unfortunate name he could imagine for a child” upon hearing it and would later use as inspiration for one of the series’ most well-known subjects of ridicule.

Anyway, even during his presidency and the height of his popularity as a political figure, Nixon was a frequent target of derision by the press due to his appearance, mannerisms and seeming inability to do anything normally. As an example of how painfully weird Nixon was the man couldn’t even eat breakfast properly with his favourite morning snack reportedly being, we shit you not, cottage cheese with ketchup on it.

Then you have his dress habits with Nixon being almost comically uptight in virtually every scenario imaginable, reportedly wearing a full suit complete with tie and dress shoes for everything from breakfast to taking his evening meal. The one notable exception being that time he had breakfast in a bathrobe which was so noteworthy it was still something people noticed and commented upon despite it happening on the day he resigned as president. Nixon was so awkward that him dressing down on the worst day of his life was something people found unusual.

With that one exception Nixon, by his own admission, wore a suit for almost every moment of his adult life. Even in scenarios where it was neither required or appropriate, like walking on a beach, which he did in dress shoes and formal slacks like an absolute mad man. 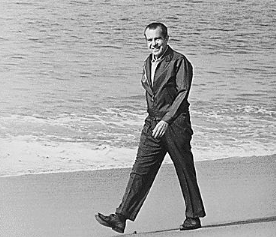 Hell, Nixon by his own admission wore a coat indoors every day, once noting that he simply felt more comfortable in them, joking that he’d catch a cold if he didn’t. A bizarre quote from a truly bizarre and painfully awkward man.