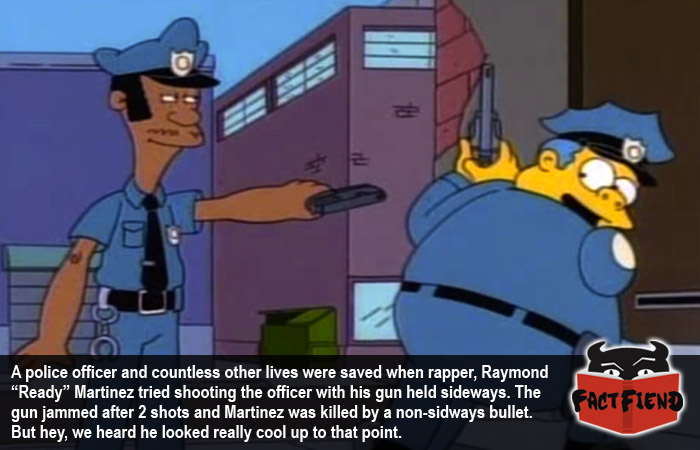 If you want to be OG (Original gangster) as hell, there’s only one, true way to let people know how without having a laminated card that says so, holding your gun sideways and shooting people with it. Because everyone knows that bullets traveling sideways hurt way more, that’s gangsta physics 101, homie.

When rapper, a word we use in the loosest possible sense because we’ve heard the Eminem song where he rhymes the word antidisestablishmentarianism, Raymond “Ready” Martinez was confronted by cops for aggressively peddling his CD (good start, Martinez) he decided to show what he’d learned in that lesson.

Rather than accept the slap on the wrist, Martinez couldn’t let his rep take a hit like that and decided he’d rather shoot the police officer in the face with the concealed Mac 10 he had stuffed haphazardly down his pants. Emulating every gangsta movie he’d ever seen, Martinez pulled out the Mac 10 pointed it at the officer at a 90 degree angle and pulled the trigger, only instead of a veritable hose of bullets gunning the officer down, Martinez’ gun let out a paltry two shots before it “stove-piped” and jammed. We presume it apologized profusely afterwards and assured everyone involved that, that had never happened before.

Seconds later Martinez was gunned down by the officers non-sideways bullets. Questioned about it afterwards, gun experts expressed that holding the gun sideways was the worst possible way too shoot it, by “worst” they obviously meant best because only an idiot died instead of a police officer with brass balls big enough to face down a freaking Mac 10!