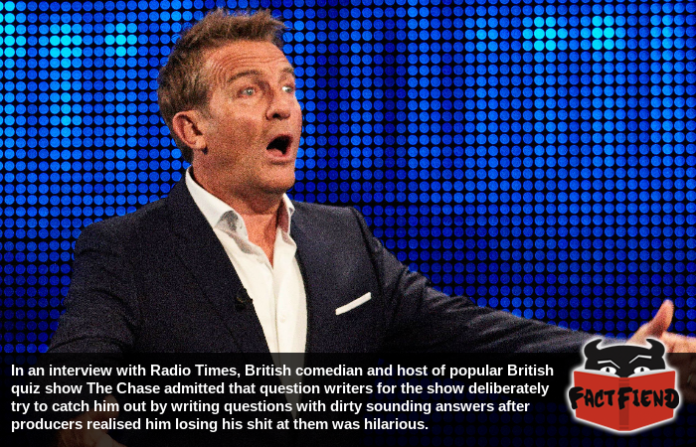 In the world of television it is generally accepted that “losing one’s shit” is frowned upon and most television producers actively work to avoid it. Producers on The Chase are an apparent exception to this rule since they spend a considerable amount of their time trying to fuck with host Bradley Walsh.

If you’re not familiar with The Chase it’s in the simplest sense a quiz show where a team composed of members of the public will answer questions in an attempt to win some money. The twist (because there’s always a twist with these shows) is that contestants are “chased” by a seasoned quiz champion and general knowledge buff who will attempt to answer more questions than they do. Part of the show’s draw is that all of these Chasers as they’re known are given flamboyant, over the top personalities and nicknames like The Beast or The Dark Destroyer.

Now initially the show got off to a rocky start and despite the best efforts of the cast, ratings weren’t that great. This all changed in 2011 when Walsh, the show’s host, absolutely began to lose his shit when the question “In what sport does Fanny Chmelar compete for Germany?” popped up on screen.

The question immediately put Walsh on his arse and the show ground to halt for several minutes as he tried to compose himself, footage the producers decided against cutting because they, like everyone on set that day found it fucking hilarious. As expected, the moment was a hit with viewers and clips of Walsh losing his shit immediately went viral. A fact that wasn’t lost on producers or the question setters for the show that decided to capitalise on the influx of new viewers tuning in to see Walsh laughing his hole off. 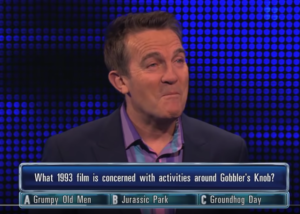 Specifically according to Walsh, after witnessing his complete inability to compose himself while reading such questions, the lead question setter for the show got an idea. Why not cram as many questions with dirty sounding answers into the show as possible to try and catch him out? 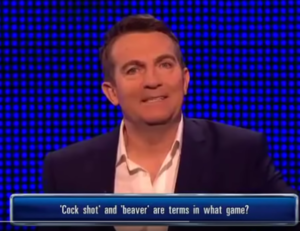 Walsh has since gotten wise to this and reportedly has to steel himself before each round of questions in an attempt to stop himself laughing. Amusingly, other contestants and even the Chasers have tried to get in on the action, making innuendo-laden comments to Walsh to try and get him to lose his shit, usually with great success because literally the entire show’s format has been slowly tilted specifically to fuck with him. 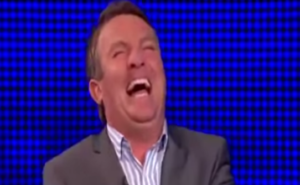