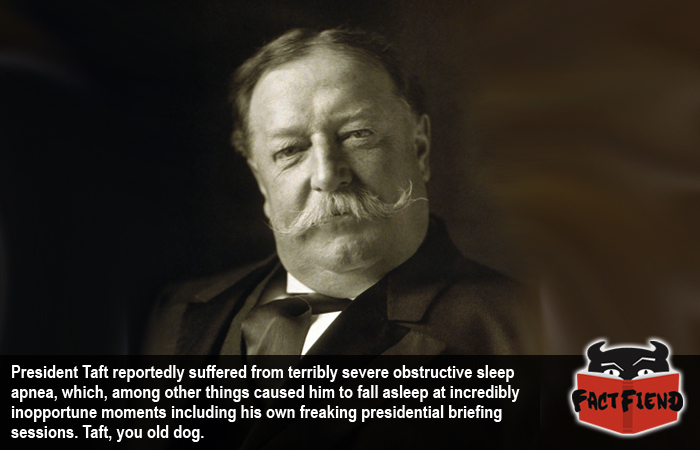 President Taft is known mostly for two things being president of the USA and being a lard-ass, now guess which one of those things people remember him for and which one of them we’re going to talk about today?

Of course we’re going to talk about Taft’s mighty heft because come on, look at the guy, he’s the heaviest and most moustachioed president we’ve ever had.

The thing few people realise though is that Taft himself was well aware of his size, it’s just that the guy didn’t give a shit because he was too busy becoming the president to care what people said. For example, when the guy was in college, a lot of people started calling him “Big Lub” because of his size, you know what he did in response? Joined the wrestling team and became the heavyweight champion of the entire region. During his later years Taft could have literally powerbomb-ed seven shades of shit out of any of his detractors, but he chose not to, because Taft was nice like that.

The thing is, Taft suffered from a much more hilarious condition than chronic fatness that no newspapers of the time ever picked up on, the fact that Taft would fall asleep seemingly completely at random. Yes, Taft, a 300 pound walrus of a man suffered from a condition that resulted in him falling asleep while eating his dinner or during meetings with foreign dignitaries, and newspapers chose to make fun of the fact he had a little junk in the trunk. There are even stories about Taft falling asleep while he was stood up just doing his thing in the White House and yet most people choose to talk about that one time he got stuck in the bath, a story that isn’t even clear if it actually happened or not.

Taft’s sleepiness was almost certainly caused by his sleep apnea, which resulted in the rubenesque luminary feeling exceptionally sleepy most of the time, a condition he suffered with most of his life and he still became the leader of the free world. Suck it, alert and awake people!