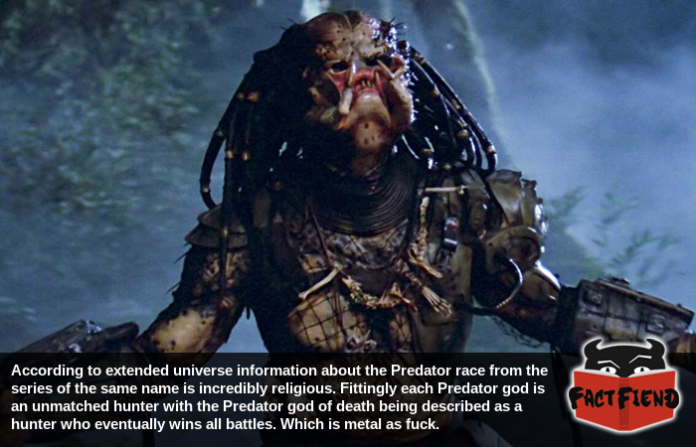 The Predators, or Yautja for people familiar with extended universe material discussing their various planet-hopping exploits, are a race of fictional aliens with a hard on for hunting and making trophies of the most dangerous game in the universe. Something they are apparently so obsessed with even their religion revolves entirely around The Hunt.

First though, for anyone who’s only seen a movie featuring a Predator and is perhaps not aware of what they’re all about, various comics and novels have revealed much about their culture and almost all of it as metal as fuck. For starters, pretty much every aspect of Predator life is informed by their battle prowess in hunting ability to the point predator females are said to only start paying attention to males after they’ve successfully punched an alien to death.

Predators also abide by a strict code of honor which again, largely concerns what Predators should consider to be fair or worthy game, but does also offer some hints into how their society functions. For example, Predators supposedly consider it “the height of bad manners” to hunt or kill anything that can’t defend itself and as such, will not harm children, the elderly or someone who is already dying. Unless they take a swing at a Predator, in which case they’re fair game because fuck them we guess. 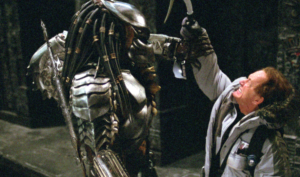 Now while this is something that is alluded to in the movies, which show things like Predators ignoring those without weapons or the means to put up a fight, it is greatly expanded upon in extended universe material which reveals that this act is one punishable by death in Predator culture.

On the contrary, Predators consider it unsporting to fight opponents who can defend themselves on even terms or to back down from a direct challenge, which is why in the movies Predators will reveal themselves to opponents who wish to fight them one-on-one and even remove their weapons if said person wants to engage in some good old fashion alien fisticuffs.

Other things considered crimes or insults by Predators include stealing the kill of another hunter and refusing to yield to a superior opponent, suggesting the species understands concepts such as fairness and getting one’s shit wrecked. 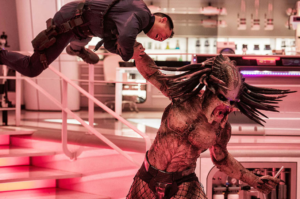 Getting back to Predator religion, hunting is so ingrained in Predator culture that the species fittingly worships gods who are great at both it and kicking dick in general. Hell, even the idea of death is something the Predators link to hunting, viewing death not as a metaphysical concept, but an abstract entity they simply call “the Black Warrior”.

According to Predator culture the Black Warrior is the ultimate adversary, a hunter who never tires, never slows and will kill you eventually, regardless of how big your battle-dick is. An idea so metal we’re curious why real world religions haven’t tried to rip it off yet because let’s be honest here, how many of the people reading this would attend church if priests wore a Predator bio-mask and talked about how death was a physical entity that was constantly stalking to you to kick your ass in half?