The most iconic image of Rick Astley is that of an awkward, dorky white guy dancing around in an oversized raincoat. Astley looks whiter than a Colgate sandwich in a snowstorm in that video, which is why it’s so hilarious that for years, people assumed he was black.

This is largely as a result of Astley’s astonishingly deep voice which stands in stark contrast to his face and the fact he spent most of the 80’s dressed like every terrible yearbook photo combined.

It’s noted that early in his career Astley would frequently find himself shaking hands with bemused record producers who had no idea that the voice they’d heard on his albums belonged to a white guy. Some Astley fans are noted to have made a similar assumption his race and there are scattered reports of fans attending concerts in the early days of his career becoming incredibly confused upon seeing him for the first time and noticing that he wasn’t the chiselled, ebony Adonis they’d assumed. 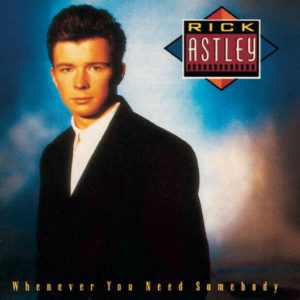 On top of dealing with incredulous record producers and disbelieving fans, Astley also had to put up with the press and journalists who continue to assert to this day that his voice was enhanced somehow using special effects. The idea that someone could just be that fucking good was an alien concept to a lot of people in the 80’s apparently.

While it’s true that some digital trickery was used on Astley’s earlier albums, mostly limited to layering his voice multiple times to make it sound louder, the same can be said of any album released during the 80’s. For better or worse, that shit was very popular in the 80’s, something Astley has expressed annoyance at in the past because he doesn’t think it improves his songs. As critics has been forced to admit since then, production techniques aside, Astley has a very strong singing voice, as any video of him singing live proves and then some.

This didn’t stop people from assuming that something was amiss with a skinny white guy dropping endless funk bombs on the radio, leading to a rumor that Rick Astley was a stand-in for another artist. In short, it was rumored that that Astley was lip-syncing to songs written and sung by a black guy that inexplicably wanted a skinny British man to get all the credit for his work.

Exactly who this black guy was supposed to be and why he wanted Rick Astley to perform on stage instead of him isn’t clear, but it’s pretty amazing that rather than believing Astley was just that good, people bought into a conspiracy theory that he was secretly a giant black man in disguise. Which, well, would explain the coat. 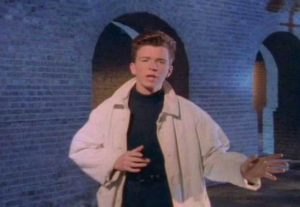