Ever wondered why every character in The Simpsons look like a child’s drawing when they’re almost out of crayons? The answer is the creators thought it was the easiest way to punch our eyeballs and get us to take notice.

To clarify, in early interviews (read, before The Simpsons was the biggest show on Earth) creator Matt Groening would answer questions about why all his characters were yellow with a stock line about catching the attention of channel surfers. According to Simpsons lore, it was colorist Gyorgyi Peluce who originally decided to make the characters yellow. Though we’re really unsure if a gal who draws human beings as yellow deserves the title of “colorist”, we’ll let that go for now.

According to Groening himself however, he was approached by an animator, not a colorist, with some sketches of his creations turned bright yellow, upon seeing Homer, Marge, Maggie, Lisa and Bart colored yellow, Groening recalled that it just “looked right” and they went with it. We’d argue but, we honestly couldn’t pictured any cast member any other color, except maybe for Smithers, but that’s only because he was black in the first season anyway. 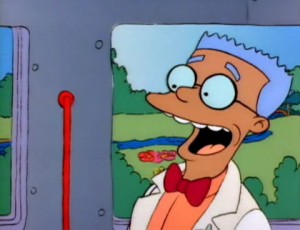 Weirdly, now that the show is way more popular, Groening’s answer about coloring the Simpsons yellow has changed slightly, whereas in the past the color was a strategic choice to attract the attention of channel surfers to actually check out the show and perhaps see “why the hell all these characters the same color as the blazing sun?“. Nowadays the answer Groening usually gives is that the characters are all yellow so that those very same channel surfers know that The Simpsons is on when they flick past it.

In other words, the color was originally to try and entice people to watch the show and perhaps become a fan, now it’s mostly used to let people know, “hey, even the shittiest episode of The Simpsons is going to be better than whatever else is on, you may as well stop looking for something else to watch, like right now“. It’s amazing what time will do, isn’t it?