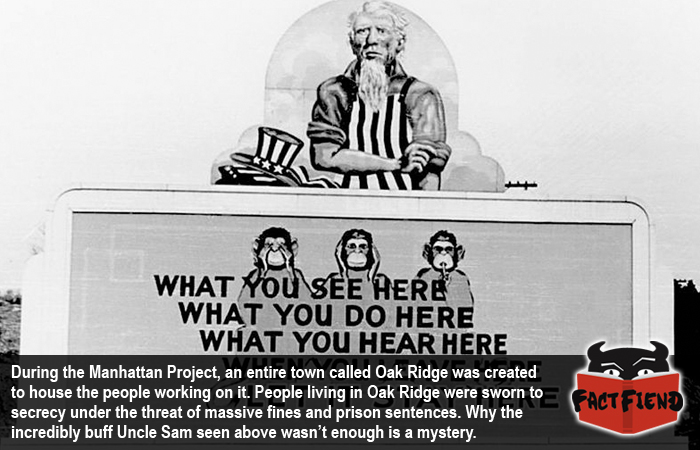 While the US was creating the atom bomb, they needed thousands of people’s help, but could only trust a handful of them with the secret of what they were actually doing. This led to the creation of Oak Ridge, a town full of people who literally had no idea what they were doing.

The town, which had a population of several thousand was chock-full of people doing various menial, but nonetheless important jobs related to the creation of the bombs that would eventually be dropped on Japan. Since their jobs were necessary, but simple, there was an odd situation where every day thousands of people would go to work and then go home racking their brains about what exactly they’d done to support the war effort.

For example, one lady tells of being incredibly perplexed at her seemingly pointless job of waving a device she’d never seen before over the laundry. The device would click at various intervals and when it did, the laundry she was inspecting had to be washed again. Now it’s obvious to us that this lady was checking for radiation with a Geiger counter, but in her head she was doing something incredibly pointless.

Others were tasked with jobs as mundane as staring at dials for hours at a time and watching smoke stacks that literally never gave off smoke (because they were taking in clean air). If curiosity ever got the better of them, their superiors (who also had no idea why they were there) were simply told to explain that the job was important to the war and to shut the hell up.

Weirdly, even though no one had any idea what they were doing, all workers were sworn to secrecy and were threatened with everything from prison time to fines if they ever talked about their jobs to outsiders. To combat boredom and to give their workers some sense of moral, the government implemented dozens of sports programs including a softball league with over 70 teams.

Apparently this worked because the bombs were created, dropped on Japan and then WW2 ended, yay, secrecy!