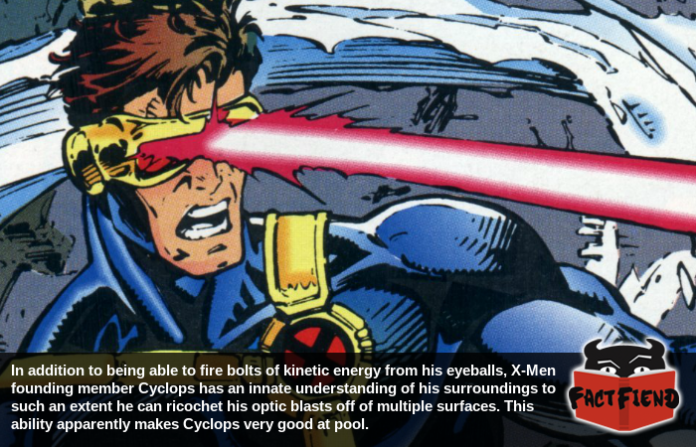 According to the comics Cyclops, AKA, Scott Summers, is a powerful mutant with the ability to fire city-obliterating kinetic blasts from his eyeballs. While admittedly Cyclops’ most visually impressive ability, it is far from the only special skill he has. For example, he’s apparently really fucking good at pool.

First though, an explanation of how exactly Cyclops’ powers work because the mechanics behind his optic blasts are fairly unique. You see, unlike say, Superman’s heat vision, Cyclops’ optic blasts don’t produce any heat and are instead described as being blasts of pure concussive force. So while Cyclops can’t for example, melt steel with his optic blasts, he can punch straight through it. 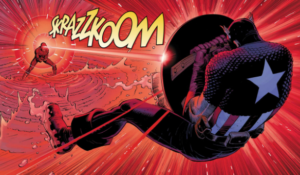 As for how the powers work, Cyclops’ body basically functions as a giant battery that absorbs and stores ambient energy from the environment. Energy his body metabolises and then fires out of his eyeballs with enough force to level a city block. In some comics however it’s instead claimed that Cyclops’ eyes are actually an inter-dimensional portal to a universe of pure energy that he can tap into at will. This latter explanation has been largely retconned for being stupid, but it is still noted that Cyclops potential eyeball energy output is “practically infinite“.

Like with many mutants, Cyclops has a bunch of ancillary abilities that are seldom discussed or mentioned in the comics but are absolutely necessary to his survival. For example, Cyclops is completely immune to the effects of his own powers to such an extent simply closing his eyes is enough to prevent an infinite amount of punch energy spilling out into the world. In addition to being necessary to prevent Cyclops from constantly firing optic blasts through his destroyed eyelids, this also stops his own body from being launched back whenever he fires a particularly powerful blast of energy. This is why Cyclops can knock people over with his eye blasts without being moved himself. 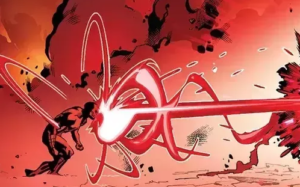 An even more obscure quirk of Cyclops’ mutant physiology though is that he has an innate, superhuman sense of spatial awareness and geometry. While this may not sound as impressive as “firing  an infinite amount of punch energy from your eyes” the ability is critical to Cyclops’ continued function as it allows him to have, at all times, supreme tactical awareness of his surroundings.

In practice this allows Cyclops to just know when and where to fire an optic blast to hit an opponent and even, ricochet it off of multiple surfaces to strike at the optimum angle to fuck up their day. 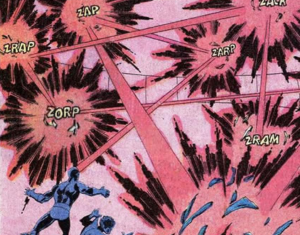 Cyclops has reportedly honed this ability even further via extensive training giving him an uncanny ability to hit a target from near enough any angle via carefully bouncing an optic blast off of walls and shit. An ability that translates amazingly well to the game of pool, which Cyclops is able to play so well that he can pot every ball at once, with his fucking eyes! 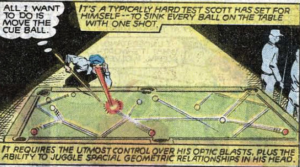 Cyclops has honed his ability to snipe pool balls to such an extent that other X-Men don’t like playing with him because he always wins. Hell, even Wolverine, a mutant who has lived for centuries and mastered every martial art on Earth lacks the skill to compete with Cyclops who routinely whups his ass every time they play. 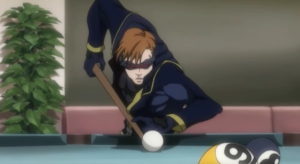 A fact that makes it all the more frustrating that in every fucking X-Men movie they show Cyclops training by shooting clay pigeons when we could have had footage of him hustling Wolverine at pool.