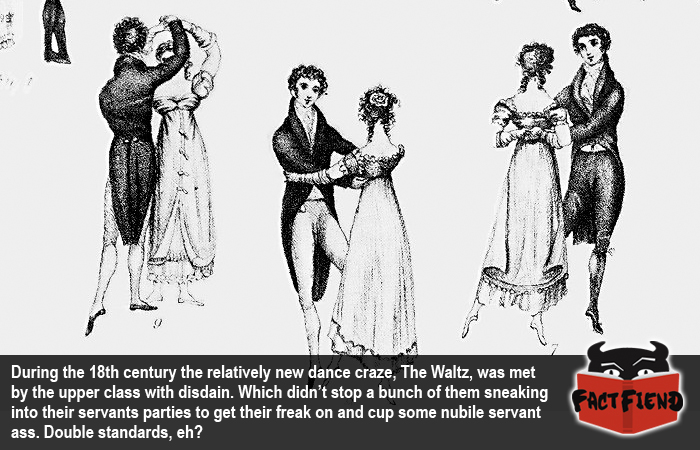 Though today the Waltz is seen as a quaint throwback to a bygone era of fly pants and fabulous wigs, when the thing was first introduced, it was a total game changer. Primarily because it was the one of the first dances that let you “accidentally” touch your partner’s butt, which is always a plus.

For those of you who aren’t aware, the Waltz is a fairly simple dance in which the male takes his partner by the waist and guides her around the dance floor while trying to remain as stoically pimp as possible. The end goal is to make it look as if you and your partner are dancing on a giant air hockey table while wearing a pair of Michael Jackson’s shoes.

It’s a simple, intimate dance that allows two people to really get close to one another, a novelty at the time the dance was introduced in around the 16th century. Though today the image of two people doing the waltz is fairly innocent, if not downright harmless, back in the 16th century the upper class thought it was way too sexy for their parties, which more than anything probably indicates that their parties sucked ass.

However, the poorer folk of the era had no such qualms about getting jiggy with it and through them the dance survived and was passed down through the generations. By the 18th century the dance was part of every self-respecting lower class man’s repertoire, because hey, those servant girls weren’t going to impress themselves.

While their servants were cupping mad amounts of ass and probably doing all sorts of backflips, the rich folk of the 18th century were still stuck dancing the Minuet, which looks more like a limp handshake than something you’d break out on the dance-floor with your best gal or guy.

In fact, the minuet was so dull and boring that it wasn’t uncommon for noblemen to literally walk out of their own parties to go dance with their servants simply because their servants knew how to actually have fun. Also, the waltz let the noblemen do something they couldn’t do with their literal giant-ass dress wearing wives, touch them.

As you can plainly see in the image above, the dresses favoured by ladies of that era didn’t exactly lend themselves to doing anything other than stand still while their husbands danced around them like bottom heavy maypoles. We’re not surprised people got sick of doing that, we get bored just writing that sentence and we got to write it sat down.

We can’t imagine how pissed off rich people must have been to spend thousands on throwing parties only to awkwardly stand three feet away from their wife while their servants were downstairs dry humping their way through the bottom rung of society. Eventually, the upper class relented and finally accepted that being pressed up against your partner was pretty great, about 200 years after poor people figured out exactly the same thing.