firstly for anyone who isn’t grasping how small of a number “300,000” units is in the grand scheme of things, it’s worth noting that Nintendo ended up shipping about 60 million of the console’s daddy, the NES before they finally stopped producing it in, erm, 2017. If that makes Nintendo sound short-sighted, it’s also worth pointing out that stores across Japan had, had about 1.5 million pre-orders for the SNES. Meaning every single one of those 300,000 consoles was already sold 5 times over before they’d even left the factory. Something Nintendo knew and still decided to charge ahead with the release anyway.

As a result of all this fuckery when the console was released in Japan in 1990, the 300,000 units Nintendo had set aside for its first shipment sold out in about an hour. As in, you literally couldn’t buy one 70 minutes after it was first made available for sale. Something that’s probably relatable to everyone reading who tried to buy a PS5 or a Zune but was unheard of at the time for a video game console of all things. 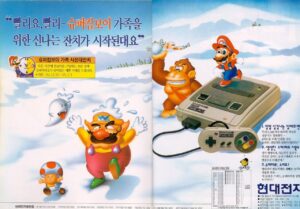 Here’s the thing though, Nintendo didn’t just make the mistake of somehow underestimating how popular their console was going to be by only shipping a fifth of the consoles needed to just fulfill the pre-orders, they doubly fucked up by telling the public that there were only about 300,000 SNES consoles in the whole of Japan. An announcement that almost immediately caused a mass panic when it dawned on customers that there were only enough consoles in the entire country for 20% of the people who’d already fucking paid for one, let alone the people hoping to just walk into a store and buy one off the shelf.

Customers, terrified at the thought of not being able to get their hands on the newest, shiniest toy, bum-rushed every electronics store in the country with fistfuls of yen and hope. The rush practically ground Tokyo, one of the busiest cities on Earth, to a halt as tens of thousands of customers, many of which had driven to the city specifically to get their hands on a SNES literally fought to get one.

It’s at this point we’d like to point out that the console was released on a Wednesday, meaning thousands of the people fighting to get the console had missed work to do so. This ended up costing the Japanese economy a couple of million dollars and probably caused at least few arguments when husbands who’d taken the day off work to get a SNES came home without one smelling like the aftermath of a fistfight.

After the dust settled and thousands of irate shoppers left store owners and workers to clean up after the busiest day of their lives, the Japanese government decided something needed to be done to prevent this from ever happening again. Which they did by politely requesting that Nintendo and indeed every video game company wishing to sell a console in Japan agreed to only do so on a weekend. While this wasn’t an official request by any means, Nintendo has honored it and then some with practically every major release of a Nintendo product taking place on a Sunday. However, they still apparently suck the absolute fat one at making enough of a product to satisfy demand.

Something we say because the company literally had to tell customers not to buy a mini version of the SNES from scalpers after rumors began circulating that they hadn’t made enough of them. Like, holy shit you think they’d have learned from that time they almost brought their home country to a fucking standstill and had the government tell them to maybe not do that again.