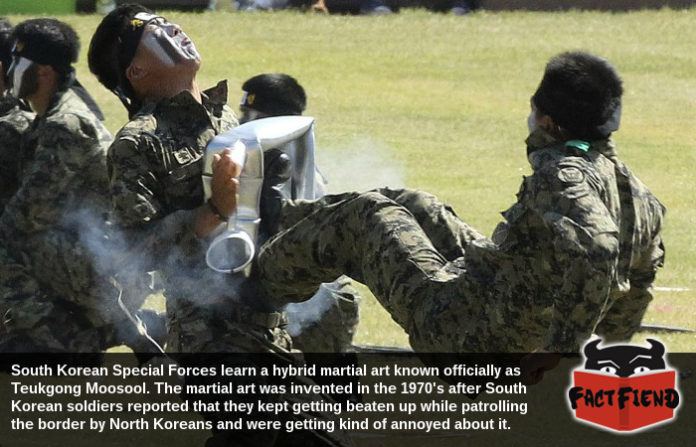 Members of South Korea’s various special forces units are more dangerous to a human windpipe than a piece of piano wire travelling 7ft off the ground at a basketball game and possess more ways to snap your arm than a swan wearing Iron Man armor. They also know a special martial art exclusively designed (originally) to beat up North Koreans.

This martial art, as noted in the macro 3 inches above this sentence is called Teukgong Moosool, a hybrid martial art incorporating the most useful and stylish elements of various other martial arts. Based primarily on Taekwondo with elements of Aikido, Muay Thai, Kung Fu and all of the other cool sounding martial arts that dickhead wearing a Tap Out shirt at your local gym pretends to be an expert in, Teukgong Moosool is a martial art designed with one thing in mind, sick, throat-crushing dropkicks and 30 hit knife combos.

As a martial art designed for military applications, Teukgong Moosool is a very deliberate fighting system, focusing mostly on incapacitating an opponent as quickly as possible. As a result, the martial art places a particular emphasis on hits to vital areas like the neck and penis and teaches practitioners to limit their movements, striking only when it necessary and when they’re sure it will result in a kill or at least their teacher crossing his arms and nodding slowly in approval.

Prior to making Teukgong Moosool the primary fighting system of its most elite military units, South Korea taught most of its soldiers Taekwondo, which saw them constantly getting their ass kicked by North Koran special forces soldiers in one-on-one engagements in the 60’s. In one particularly embarrassing incident in the late 60’s a single North Korean soldier was able to beat the shit out of 3 highly trained South Korean commandos before stealing away into the night.

Embarrassed by this incident and others like it, top military officials tasked those in charge of their special force to invent a better, more badass martial art. After years of blending together features and techniques from dozens of martial arts, a Korean Taekwondo master came up with, Teukgong Moosool, a fighting style that could defeat all others. Or at least on paper it can, something we saw because we just know writing that previous statement is begging for someone to correct us by mentioning that there’s actually an obscure martial art hailing from Siberia that can punch your testicles off or something. 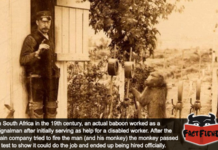