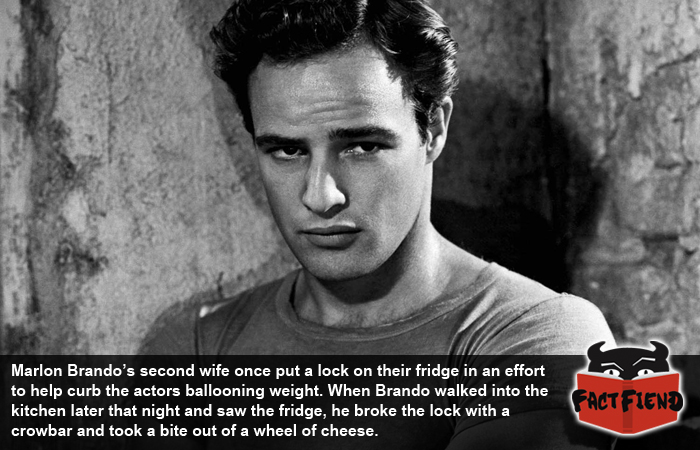 This article, along with over 2 dozen others has now been made into a video on that YouTube channel we will never stop mentioning. You can check it right here.

As usual, you can find the original text article after the jump.

Marlon Brando is the quintessential Hollywood bad boy and during his half century long stint as one of the the greatest actors in history he has dedicated a frankly heroic amount of his time to not giving an ounce of a shit. If you want an example of how little Brando cared about what people thought about him, you only need to consider his attitude towards food.

Fans of Brando are probably well aware that the actor became hugely overweight during his later years, however few people realise just how ridiculous his eating habits were. As noted in the image at the top of this very screen, Brando’s second wife once placed a lock on the couple’s fridge. While sources don’t agree on why exactly she did this and whether it was to stop Brando eating or because she thought staff were stealing food, they do agree on what happened when Brando noticed the lock on his food cube. He broke the shit out of it with a crowbar and took a huge bite out of a comically large wheel of cheese, because fuck you, he was hungry.

But that is just the tip of a very greasy iceberg. You see when Brando was forced to go on a diet by another one of his girlfriends a few years earlier, he played along during the day and then had his friends hurl bags of Burger King over his fence at night for him to snack on. It took Brando’s girlfriend months to figure out what was going on after she became annoyed that he wasn’t losing any weight. It was only when she saw Brando sneaking out at 2AM and found him ankle deep in Whooper wrappers that she realised what had been going on.

Hell, even before his weight gain, Brando would sit on set eating entire roast chickens between takes and he would randomly wander off when he wasn’t needed on set to go find things to eat. This happened so much so that studios had to send people to physically drag Brando back to the set because if they didn’t, he’d gorge himself on fatty food and then fall asleep. That not crazy enough for you? Well while he was filming of Mutiny on the Bounty, Brando had a plane filled with champagne and ham flown to his location in Tahiti. Why? Because he really wanted some ham and because it’s not like anyone was going to fucking stop him is it?

If you’re wondering how Brando got away with this behaviour without being fired or punched in the face it’s because he was just that good of an actor. In the 60’s Brando was one of the most sought after men in Hollywood and you better believe that he milked the shit out of his status. During the production process of the aforementioned Mutiny on the Bounty whenever Brando wasn’t having ham air-lifted to his location he’d spend his time being a huge dick.

Brando would turn up late to most every single day, refuse to speak the lines given and then demand re-writes in the middle of scenes. When the re-writes didn’t happen, Brando would just make up his own lines instead. When his co-stars complained they couldn’t figure out their cues if Brando kept saying the wrong lines, he put cotton wool in his ears so he couldn’t hear them and said them anyway.

Which is doubly hilarious because Brando famously hated learning his lines, instead preferring to have them written on cue cards or in some cases other actors in the scene. For example, when he was filming Last Tango in Paris, Brando kept forgetting his lines even when they were put right in front of him. When the director asked what he could do to make Brando, you know, do his fucking job, the actor thought for a moment and then asked if the director would attach the lines to the naked ass of the actress he was starring alongside. The director refused. As you’d expect given his penchant for going all Grand Theft Auto on his own fridge, Brando didn’t let this go and when he was cast as Jor El in Superman he he had his lines written on baby Superman’s diaper, presumably as an subtle hint about how shit he felt they were.

Speaking of Superman, despite appearing on screen for only a few minutes, Brando was the highest paid actor in that entire movie, earning considerably more than Christopher Reeve, you know, the guy playing, fucking Superman!

As if being paid more than the lead character wasn’t a big enough slap in the face for comic fans, Brando also tried to argue that his character should have been played by a giant green CGI bagel. A request that was denied only because the director personally appealed to Brando and explained that nowhere in the comics is it mention that Superman’s dad was a fucking pastry.

Another thing Brando was famous for was picking up random things on set and refusing to put them down, forcing the director to put them into the movie, for example when he was filming The Island of Dr. Moreau, Brando picked up an ice bucket, put it on his head and told the director he wasn’t taking it off, so it ended up in the movie. The most famous example though is probably the one you’re most familiar with, the cat from The Godfather.

That cat wasn’t in the script, it was a stray that Brando found wandering around on set and he decided that he liked it. What makes this even better though is that The Godfather went on to become arguably his most famous role and the meaning of the cat has been interpreted and dissected by critics and film buffs for years, even though the only reason it appeared in the scene was because Brando wouldn’t put it the hell down.

Even in his old age Brando’s legendary inability to give a shit was still in full swing and when the actor sat down in the 90’s to write his memoirs he called up Ursula Andress, a woman many have voted as one of the most beautiful in history, told her she was beautiful and then asked if they’d ever slept together.  Just let that soak in for a second, Marlon Brando once called up ONE OF THE MOST BEAUTIFUL WOMEN ON EARTH because he couldn’t remember whether or not he’d slept with her. 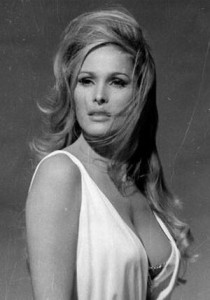 As a final testament to Brando’s balls, he famously used his first Oscar as a doorstop until it was stolen from his home in a robbery, after the theft Brando wrote to the Academy to ask for a replacement. We don’t know about you guys, but we’re really hoping that they hire Nic Cage to play this guy in a biopic one day.