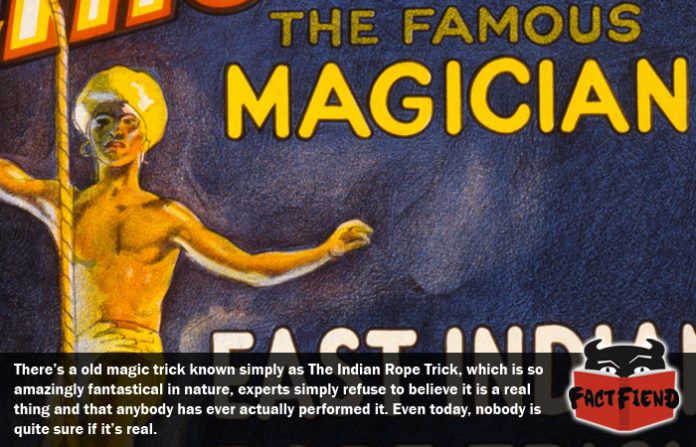 Thanks to the internet, there aren’t very many magic tricks out there that haven’t been spoiled by someone on YouTube. Which is what makes the Indian rope trick so unique in the world of magic because despite being one of the most famous tricks of all time, we don’t only know how it’s done, but there’s fierce debate about whether it even exists.

For anyone unfamiliar with the trick, the most basic version is that the magician, usually dressed an an Indian Fakir, will charm a length rope out of a large basket like the world’s shittiest looking snake. The magician will then demonstrate how the formally flaccid piece of rope has become stiffer than an iron rod coated in Viagra by asking a young boy to climb to the top of it. We erm, probably could have used a better metaphor there. 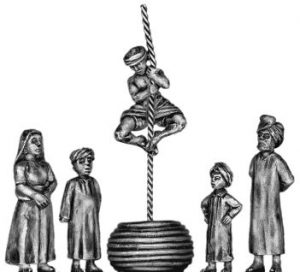 Which in of itself, doesn’t sound all that fantastical, does it? We mean, David Copperfield used to make the Statue of Liberty disapper and Penn and Teller once staged a trick where Peller got run the fuck over by a truck.

So all things considered, a mysterious demon rope rising from a basket like a pissed off cobra and then having a small child climb that rope isn’t that impressive. Which is where we come to the second part of the trick, the part that has magicians the world over, including the aforementioned Penn and Teller, completely stumped about whether or not this trick is possible.

You see, after the young child ascends the rope, traditionally the magician is said to then climb the rope themselves with a great big fucking knife. A few seconds after reaching the top and being obscured from view, a scream is heard and several body parts fall from the sky. The magician then descends, claps his hand – making the rope fall neatly back into the basket – and then throws the severed body parts into the basket too. The lid is then put on and a few seconds later the boy emerges from the basket unharmed.

This particular aspect of the trick is what makes magicians so unsure it’s possible because while various magicians have been able to reproduce the rope part of the Indian rope trick, which you’d assume is the most important part, none have been able to convincingly pull off this final part in front of witnesses, outdoors.

For example, in the picture above(which was most likely staged and not witnessed live), it’s largely believed the effect was achieved with an iron pole which was then disguised as a length of rope. Some magicians think a similar effect could be accomplished by simply attaching a piece of string to the end of the rope and looping it over another rope hidden in the sky, perhaps strung between two buildings or something, and having someone hidden nearby pull it, making it look like the rope is magically rising into the sky.

However, while numerous magicians have come up with ideas about how you’d achieve the effect of making the rope rise into the air indoors and numerous pictures exist of people seemingly sitting atop magically suspended ropes. There’s little evidence anyone has ever been able to convincingly demonstrate the trick in the open air. In fact, some magicians are so confident that this trick as it’s classically described is impossible, that over the years several of them have offered fairly substantial rewards just to see it performed in the open and nobody has ever come forward to demonstrate it.

That was until 1995 when a magician called Ishamuddin Khan did exactly that, only to have the collective magic community ignore him and refused to acknowledge that he’d completed to trick to a satisfactory degree, because he didn’t pretend to murder a child while doing so. Figures.