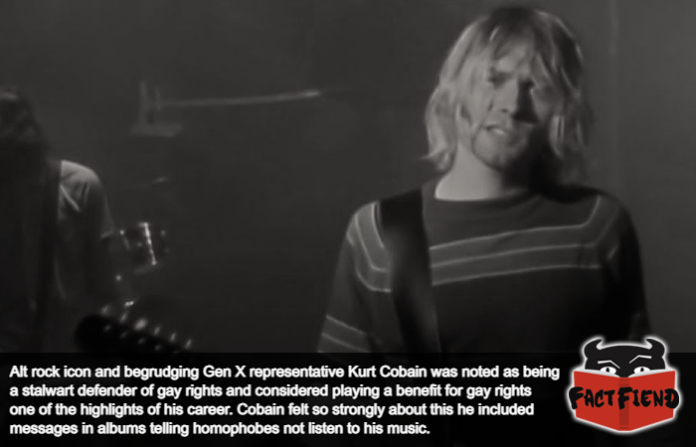 Kurt Cobain is an alt rock icon and begrudging symbol of Generation X whose melodic, angst-driven music and infectiously playful laissez-faire attitude helped define an entire era. Although best known for his creative output, Cobain himself was much prouder of his social activism and how much it pissed off bigots.

You see, as you might imagine given his legacy as the quintessential social outcast and anarchistic punk rock luminary, Cobain felt a certain kinship with members of the LGBTQ+ community. Something that reportedly stemmed from Cobain’s childhood, specifically him being endlessly bullied for being weird and having a gay friend. All of which proved to be formative experiences in the young rock stars life, turning him into a fierce ally of the marginalised. Which turned out to be quite handy when Cobain became one of the most famous men on Earth. 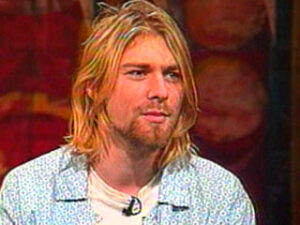 To explain, after the release of Nervermind Cobain quickly became disillusioned with his success and in particular, people claiming to be fans of his music who didn’t also vehemently appose bigotry in all its forms. As in his eyes, the bands politics and music were closely intertwined.

In fact, this pissed Cobain off so much that he’d frequently ask fans who listened to bands who didn’t support people’s rights to fuck off. With Cobain once telling a fan on stage that if they listened to Guns N’ Roses they should stop listening to his music as he knew from personal experience that Axl Rose was a huge, swaggering asshole after he made a joke about them being a shit band and the fan literally leapt onto the stage to defend them. 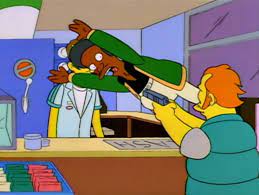 If any of you in any way hate homosexuals, people of different color, or women, please do this one favor for us—leave us the fuck alone! Don’t come to our shows and don’t buy our records.

A bold, practically unheard of move in the music industry that Cobain doubled down on even harder for the band’s next album In Utero, writing an even more direct message to “fans” of the band that didn’t share his views that read telling them, in part, to not buy the CD and that he hated them. Like a fucking boss.

Even before he was the begrudging voice of an entire generation though Cobain was still supporting the marginalised in his own way with one of his favourite pastimes as a teenager being vandalising the trucks of racists and bigots to say things like “HOMO SEX RULES” and “GOD IS GAY” and then waking up early to see how much it pissed them off. Cobain would also frequently pretend to be gay to annoy the same people. Something that continued into Cobain’s adulthood with him frequently kissing his bandmates when taking publicity shots purely to piss off homophobes.

After being famous Cobain similarly went out of his way to annoy bigots, using his platform and fame to promote lesser known bands with gay members, loudly decry bands with shitty politics and going out of his way to only speak with gay interest magazines when promoting later albums so that fans wanting to read about the band had to buy them. A fact that makes Cobain a curiously oxymoronic figure in that he clearly cared a lot about the less fortunate but also, somehow didn’t give a single solitary fuck his entire life.