Given that he’s due to square off against Godzilla in his next film outing, King Kong’s absence from Godzilla: King of the Monsters is a little egregious considering the film’s premise is that every monster in the world is turned against our favourite atomic monster. As it turns out though, Kong didn’t turn up to fight Godzilla because he simply doesn’t give a shit.

To explain, in the so-called Legendary MonsterVerse – AKA pretty much the only cinematic universes besides the MCU that isn’t a huge embarrassing failure – it is established that giant monsters not only exist, but are a natural part of the Earth’s ecosystem. For example, Godzilla is described as the lone surviving member of an ancient super-species that protected the world from other, equally as giant monsters.

The whole thing is a little complicated so the simplified version is that all the giant monsters introduced in the films answer to Godzilla. The exceptions to this being King Kong and Ghidorah. The latter of which is a triple headed dragon from space that supplanted Godzilla’s as the alpha Titan millennia ago. Again, all you need to know here is that in the films, Ghidorah is a huge dickhole capable of bending other Titans to his will. In fact, he’s so good at this that in the film Godzilla: King of the Monsters Ghidorah, Ghidorah is capable of rousing other Titans from thousands of years of slumber, simply by roaring. 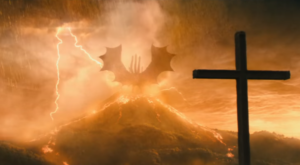 The effect of this roar is so powerful that Titans the world over begin to immediately converge on Ghidorah’s location, which begs the question. Where the fuck is King Kong? A character who absolutely exists in this universe and should realistically, be just as entranced by the call of this space-faring triple dragon. Well, according to the film’s novelisation, Kong did heard Ghidorah’s call all the way from Skull Island, it’s just that he chose to ignore it.

In fact, the novelisation notes that Ghidorah’s call has no effect on Kong whatsoever  besides annoying him and even then this is only because it wakes up the evil skull lizards that live below his island. The novel continues and explains that Kong, in a fit of rage, kicks the everloving shit out of every monster on the island he finds trying to leave to help Ghidorah. 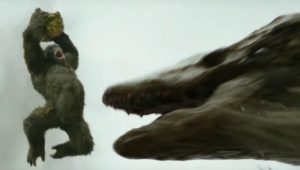 Exactly why Kong is immune to Ghidorah’s beckoning scream isn’t clear, though it’s likely because Kong is one of the few Titans introduced in the MonsterVerse who explicitly tries to protect human life. A feat he accomplishes via a judicious application of screaming, ape-elbow drops and twirling rudder combos. Which is presumably how he earned the moniker King Kong.